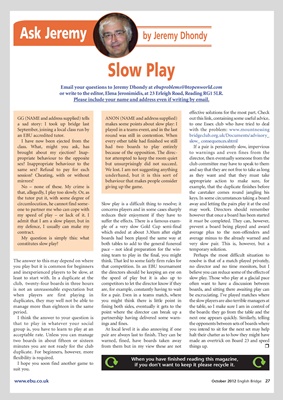 Email your questions to Jeremy Dhondy at ebuproblems@btopenworld.com

Please include your name and address even if writing by email.

effective solutions for the most part. Check

a sad story: I took up bridge last makes some points about slow play: I to one Essex club who have tried to deal

September, joining a local class run by played in a teams event, and in the last with the problem: www.mountnessing

an EBU accredited tutor. round was still in contention. When bridgeclub.org.uk/Documents/advisory_

I have now been ejected from the every other table had finished we still slow_ consequences.shtml

class. What, might you ask, has had two boards to play entirely If a pair is persistently slow, impervious

brought about my ejection? Inap- because of the opposition. The direc- to warnings and even fines from the

propriate behaviour to the opposite tor attempted to keep the room quiet director, then eventually someone from the

sex? Inappropriate behaviour to the but unsurprisingly did not succeed. club committee may have to speak to them

same sex? Refusal to pay for each We lost. I am not suggesting anything and say that they are not free to take as long

session? Cheating, with or without under hand, but it is this sort of as they want and that they must take

mirrors? behaviour that makes people consider appropriate action to make sure, for

No – none of these. My crime is giving up the game. example, that the duplicate finishes before

that, allegedly, I play too slowly. Or, as the caretaker comes round jangling his

the tutor put it, with some degree of keys. In some circumstances taking a board

circumlocution, he cannot find some- Slow play is a difficult thing to resolve; it away and letting the pairs play it at the end

one to partner me who can cope with concerns players and in some cases sharply may work. Directors should remember

my speed of play – or lack of it. I reduces their enjoyment if they have to however that once a board has been started

admit that I am a slow player, but in suffer the effects. There is a famous exam- it must be completed. They can, however,

my defence, I usually can make my ple of a very slow Gold Cup semi-final prevent a board being played and award

contract. which ended at about 3.30am after eight average plus to the non-offenders and

My question is simply this: what boards had been played the same way at average minus to the already warned and

constitutes slow play? both tables to add to the general funereal very slow pair. This is, however, but a

pace – not ideal preparation for the win- temporary solution.

ning team to play in the final, you might Perhaps the most difficult situation to

The answer to this may depend on where think. That led to some fairly firm rules for resolve is that of a match played privately,

you play but it is common for beginners that competition. In an EBU tournament no director and no time monitors, but I

and inexperienced players to be slow, at the directors should be keeping an eye on believe you can reduce some of the effects of

least to start with. In a duplicate at the the speed of play but it is also up to slow play. Those who play at a glacial pace

club, twenty-four boards in three hours competitors to let the director know if they often want to have a discussion between

is not an unreasonable expectation but are, for example, constantly having to wait boards, and sitting there awaiting play can

when players are first playing in for a pair. Even in a teams match, where be excruciating. I’ve played matches where

duplicates, they may well not be able to you might think there is little point in the slow players are also terrible managers at

manage more than eighteen in the same fining both sides, eventually it gets to the the table, so I make sure I am in control of

period. point where the director can break up a the boards: they go from the table and the

I think the answer to your question is partnership having delivered some warn- next one appears quickly. Similarly, telling

that to play in whatever your social ings and fines. the opponents between sets of boards where

group is, you have to learn to play at an At local level it is also annoying if one you intend to sit for the next set may help

acceptable rate. Unless you can manage pair are always last to finish. They can be halt their chatter as to how they might have

two boards in about fifteen or sixteen warned, fined, have boards taken away made an overtrick on Board 23 and speed

minutes you are not ready for the club from them but in my view these are not things up. r

duplicate. For beginners, however, more

flexibility is required. When you have finished reading this magazine,

I hope you soon find another game to if you don’t want to keep it please recycle it.