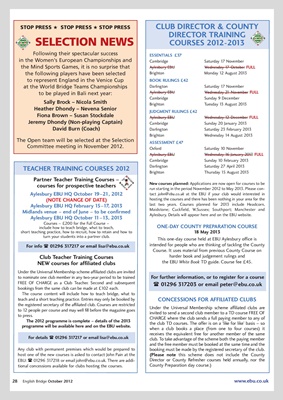 in the Women's European Championships and Cambridge Saturday 17 November

the Mind Sports Games, it is no surprise that Aylesbury EBU Wednesday 17 October FULL

the following players have been selected Brighton Monday 12 August 2013

to represent England in the Venice Cup BOOK RULINGS £42

to be played in Bali next year: Aylesbury EBU Wednesday 21 November FULL

The Open team will be selected at the Selection ASSESSMENT £47

New courses planned: Applications are now open for courses to be

courses for prospective teachers run starting in the period November 2012 to May 2013. Please con-

Aylesbury EBU HQ October 19–21, 2012 tact john@ebu.co.uk at the EBU if your club would interested in

Midlands venue – end of June – to be confirmed

Aylesbury. Details will appear here and on the EBU website.

include how to teach bridge, what to teach, ONE-DAY COUNTY PREPARATION COURSE

short teaching practice, how to recruit, how to retain and how to 18 May 2013

turn your students into a partner club.

This one-day course held at EBU Aylesbury office is

For info ( 01296 317217 or email lisa@ebu.co.uk intended for people who are thinking of tackling the County

Course. It uses material from previous County Course on

Under the Universal Membership scheme affiliated clubs are invited

to nominate one club member in any two-year period to be trained For further information, or to register for a course

bookings from the same club can be made at £102 each.

The course content will include how to teach bridge, what to

teach and a short teaching practice. Entries may only be booked by CONCESSIONS FOR AFFILIATED CLUBS

the registered secretary of the affiliated club. Courses are restricted

Under the Universal Membership scheme affiliated clubs are

programme will be available here and on the EBU website.

receives the equivalent free for another member of the same

Any club with permanent premises which would be prepared to booking must be made by the registered secretary of the club.