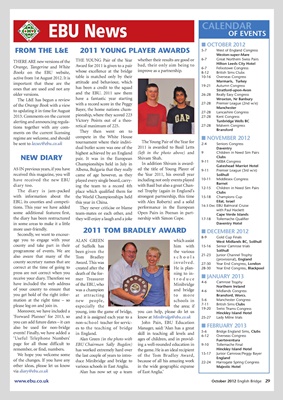 THERE ARE new versions of the Hilton Leeds City Hotel

Orange, Tangerine and White Award for 2011 is given to a pair bad, their only aim being to

Books on the EBU website, whose excellence at the bridge improve as a partnership. 8-12 British Sims Clubs

active from 1st August 2012. It is table is matched only by their 10-16 Overseas Congress

attitude and behaviour, which Marmaris, Turkey

important that these are the 19-21 Autumn Congress

The L&E has begun a review have a fantastic year starting Wroxton, Nr Banbury

of the Orange Book with a view

to updating it in time for August Bayer, the home nations cham-

tions together with any com- retical maximum of 225. 27-28 Malvern Congress

They then went on to Bransford

ments on the current licensing

regime are welcome, and should compete in the White House n NOVEMBER 2012

be sent to lecsec@ebu.co.uk tournament where their indivi- The Young Pair of the Year for 2-4 Seniors Congress

NEW DIARY pair. It was in the European Shivam Shah.

AS IN previous years, if you have Albena, Bulgaria that they really ed the title of Young Player of 9-11 Premier League (3rd w/e)

received this magazine, you will came of age however, as they the Year 2011, his overall year Solihull

have received the new EBU played every single board, carry- including not only events played 10-11 Middlesex Congress

diary too. ing the team to a record 4th with Basil but also a great Chan-

with information about the the World Championships held strongest partnership, this time 15-18 Champions Cup

EBU, its counties and competi- this year in China. with Alex Roberts) and a solid Eilat, Israel

tions. This year we have added They never criticise or blame performance in the European

some additional features: first, team-mates or each other, and Open Pairs in Poznan in part- Cape Verde Islands

the diary has been restructured they will enjoy a laugh and a joke nership with Simon Cope. 17-18 Tollemache Qualifier

in some areas to make it a little Daventry Hotel

Secondly, we want to encour-

age you to engage with your ALAN GREEN which assist West Midlands BC, Solihull

programme of events. We are been given the the various Solihull

also aware that many of the 21-23 Junior Channel Trophy

correct at the time of going to created after the He is plan- 28-30 Year End Congress, Blackpool

have included the web address of the EBU, who Minibridge Northern Ireland

you get hold of the right infor- at at tracting to more Bransford, Worcs.

mation at the right time – so new people, schools in 5-6 Manchester Congress

please log on and join in. 7-11 British Sims Clubs

Moreover, we have included a young, into the game of bridge, you can help, please do let us Hinckley Island Hotel

‘Forward Planner’ for 2013, so and it is assigned each year to a know at Minibridge@ebu.co.uk 25-27 Lady Milne trials

you can add future dates – it can non-school teacher for servic- John Pain, EBU Education

also be used for non-bridge es to the teaching of bridge Manager, said: ‘Alan has a great n FEBRUARY 2013

events! Finally, we have added a 5-6 Bridge England Sims, Clubs

in England. skill in teaching all levels and 6-12 Overseas Congress

‘Useful Telephone Numbers’ Alan Green (in the photo with ages of children, and in provid- Fuerteventura

remember, or find, numbers. has worked extremely hard over the game. He is an ideal recipient Hinckley Island Hotel

We hope you welcome some 15-17 Junior Camrose/Peggy Bayer

the last couple of years to intro- of the Tom Bradley Award,

of the changes. If you have any duce Minibridge and bridge to because of all his amazing work 22-24 Harrogate Spring Congress

via diary@ebu.co.uk Alan has now set up a team of East Anglia.’