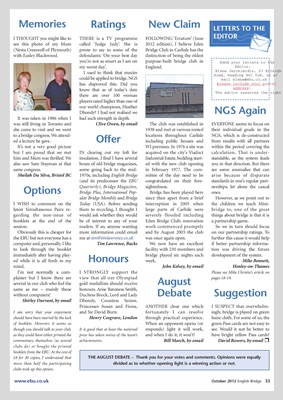 see this photo of my Mum called ‘Judge Judy’. She is 2012 edition), I believe Eden

with Easley Blackwood. defendants: ‘On your best day distinction of being the oldest

I used to think that maxim Road, Reading RG1 5LR, or e?

could be applied to bridge. NGS mail elena@ebu.co.uk

has disproved this. Did you (please include your postal

know that as of today’s date

there are over 100 woman

players rated higher than one of

Dhondy? I had not realised we NGS Again

It was taken in 1986 when I had such strength in depth.

was still living in Toronto and Clive Owen, by email The club was established in EVERYONE seems to focus on

to a bridge congress. We attend- locations throughout Carlisle NGS, which is de-constructed

ed a lecture he gave. Offer including public houses and from results with all partners

It’s not a very good picture WI premises. In 1976 a site was within the period covering the

but I am proud that we met IN clearing out my loft for acquired on the city’s Viaduct calculation. That is under -

him and Mum was thrilled. We insulation, I find I have several Industrial Estate, building start- standable, as the system leads

also saw Sam Stayman at that boxes of old bridge magazines, ed with the new club opening you in that direction. But there

same congress. some going back to the mid- in February 1977. The com- are some anomalies that can

Sheilah Da Silva, Bristol BC 1970s, including English Bridge mittee of the day need to be arise because of disparate

Options Bridge Plus, International Pop- Bridge has been played here ones.

ular Bridge Monthly and Bridge since then apart from a brief However, as we point out to

I WISH to comment on the Today (USA). Before sending interruption in 2005 when the children we teach Mini-

latest Simultaneous Pairs re- them to recycling, I thought I large parts of Carlisle were bridge to, one of the great

booklets at the end of the be of interest to any of your Eden Bridge Club; renovation a partnership game.

session. readers. If so, anyone wanting work commenced promptly So we in turn should focus

Obviously this is cheaper for more information could email and by August 2005 the club on our partnership ratings. To

the EBU but not everyone has a me at tim@timlawrence.co.uk was once again open. further this cause it would help

computer and, personally, I like Tim Lawrence, Bucks We now have an excellent if better partnership informa-

immediately after having play- bridge played six nights each development of the system.

ed while it is all fresh in my Honours week. Mike Bennett,

plainer but I know there are view that all our Olympiad pages 18-19.

same as me – mainly those honours. Arise Baroness Smith,

Princesses Susan and Fiona, ANOTHER close one which I SUSPECT that overwhelm-

I am sorry that your enjoyment and Sir David Burn. fortunately I can resolve ingly, bridge is played on green

should have been marred by the lack Henry Cosgrave, London through practical experience. baize cloth. For some of us, the

of booklets. However, it seems as When an opponent opens (or green Pass cards are not easy to

though you should talk to your club, It is good that at least the national responds) light it will work, see. Would it not be better to

as they could have either printed the press has taken notice of the team’s and when I do it, it won’t! have bright yellow Pass cards?

clubs do) or bought the printed

booklets from the EBU. At the cost of

£8 for 20 copies, I understand that THE AUGUST DEBATE – Thank you for your votes and comments. Opinions were equally

more than half the participating divided as to whether opening light is a winning action or not.

clubs took up this option.