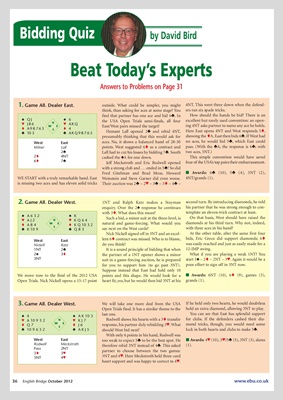 1. Game All. Dealer East. outside. What could be simpler, you might 4NT. This went three down when the defend-

think, than asking for aces at some stage? You ers ran six spade tricks.

find that partner has one ace and bid 6®. In How should the hands be bid? There is an

presumably thinking that this would ask for showing the tA. East then bids 6®. If West had

Milner Lall points. West suggested 6t as a contract and pass. (With the ®A, the response is 6®; with

2t 4NT cashed the ´A for one down. This simple convention would have saved

6t 7® four of the USA’s top pairs their embarrassment.

WE START with a truly remarkable hand. East Weinstein and Steve Garner did even worse. 4NT/grands (1).

enquiry. Over the 2´ response he continues his partner that he was strong enough to con-

with 3t. What does this mean? template an eleven-trick contract at least.

Such a bid, a minor suit at the three-level, is

t K Q 10 3 2 natural and game-forcing. What would you diamonds at his third turn. Why not, indeed,

Nick Nickell signed off in 3NT and an excel- At the other table, after the same first four

Nickell Katz do you think? was easily reached and just as easily made for a

1NT 2® It is a sound principle of bidding that when 12-IMP swing.

2´ 3t the partner of a 1NT opener shows a minor What if you are playing a weak 1NT? You

for you to support him (to go past 3NT). poor effort to sign off in 3NT now.

Suppose instead that East had held only 10

3. Game All. Dealer West. We will take one more deal from the USA If he held only two hearts, he would doubtless

Open Trials final. It has a similar theme to the hold an extra diamond, allowing 3NT to play.

W E mond tricks, though, you would need some

With only 6 points in his hand, Rodwell was

Rodwell Meckstroth therefore rebid 3NT instead of 4®. This asked (1).

partner to choose between the two games:

heart support and was happy to correct to 4™.