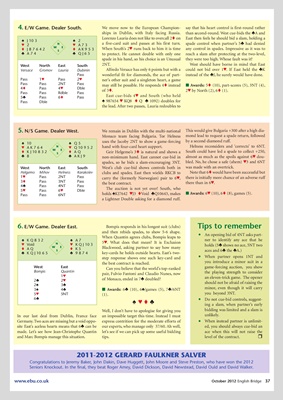 4. E/W Game. Dealer South. We move now to the European Champion- say that his heart control is first-round rather

ships in Dublin, with Italy facing Russia. than second-round. West cue-bids the ®A and

Lorenzo Lauria does not like to overcall 2t on East then feels he should bid a slam, holding a

™ A73 a five-card suit and passes at his first turn. spade control when partner’s 5® had denied

® A74 ® QJ65 to protect. He cannot double with only one reach a slam after protecting at the two-level,

spade in his hand, so his choice is an Unusual they were too high. Whose fault was it?

West North East South 2NT. West should have borne in mind that East

Versace Gromov Lauria Dubinin Alfredo Versace has only 6 points but with a could not bid over 1™. If East held the ®K

Pass wonderful fit for diamonds, the ace of part- instead of the ®J, he surely would have done.

Pass 1™ Pass 2™ ner’s other suit and a singleton heart, a game

the lead. After two passes, Lauria redoubles to

5. N/S Game. Dealer West. We remain in Dublin with the multi-national This would give Bulgaria +300 after a high dia-

uses the Jacoby 2NT to show a game-forcing by a second diamond ruff.

® 8 ® AKJ9 non-minimum hand. East cannot cue-bid in almost as much as the spoils against 6™ dou-

West North East South West’s club cue-bid shows controls both in was made with an overtrick.

Helgemo Mihov Helness Karakolev clubs and spades. East then wields RKCB to Note that 6t would have been successful but

1™ Pass 2NT Pass carry the (formerly Norwegian) pair to 6™, there is initially more chance of an adverse ruff

a Lightner Double asking for a diamond ruff.

and then rebids spades, to show 5-6 shape.

ner to identify any ace that he

5™. What does that mean? It is Exclusion

t K5 Blackwood, asking partner to say how many

you introduce a minor suit in a

the best contract is reached.

West East Can you believe that the world’s top-ranked game-forcing auction, you show

1™ an eleven-trick game. The opener

should not be afraid of raising the

ing a slam, when partner’s early

Well, I don’t have to apologise for giving you bidding was limited and a slam is

In our last deal from Dublin, France face an impossible target this time. Instead I must unlikely.

Germany. Two aces are missing but a void oppo-

site East’s aceless hearts means that 6® can be

express contrition for the moderate efforts of

• When instead partner is unlimit-

ed, you should always cue-bid an

made. Let’s see how Jean-Christophe Quantin let’s see if we can pick up some useful bidding ace when this will not raise the

and Marc Bompis manage this situation. tips. level of the contract. r