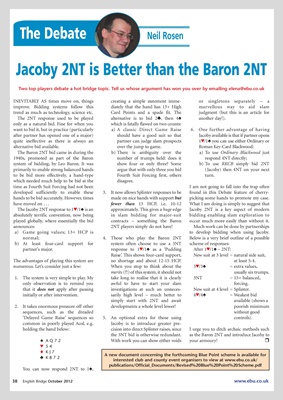 Jacoby 2NT is Better than the Baron 2NT

INEVITABLY AS times move on, things creating a simple statement imme- or singletons separately – a

improve. Bidding systems follow this diately that the hand has 13+ High marvellous way to aid slam

trend as much as technology, science etc. Card Points and a spade fit. The judgment (but this is an article for

The 2NT response used to be played alternative is to bid 2®, then 4´ another day!).

only as a natural bid. Fine for when you which is fatally flawed on two counts:

want to bid it, but in practice (particularly a) A classic Direct Game Raise 6. One further advantage of having

1940s, promoted as part of the Baron number of trumps held: does it respond 4NT directly;

system of bidding, by Leo Baron. It was show four or only three? Some b) To use RKCB simply bid 2NT

to be bid more effectively, a hand-type Fourth Suit Forcing first, others turn.

which needed much help to be bid at the disagree.

developed sufficiently to enable these 3. It now allows Splinter responses to be found in this Debate feature of cherry-

hands to be bid accurately. However, times made on nice hands with support but picking some hands to promote my case.

The Jacoby 2NT response to 1™/1´ is an approximately. This gives a huge edge Jacoby 2NT is a key aspect of modern

played globally, where essentially the bid contracts – something the Baron occur much more easily than without it.

announces: 2NT players simply do not have! Much work can be done by partnerships

a) Game going values; 13+ HCP is to develop bidding when using Jacoby.

normal; 4. Those who play the Baron 2NT Below is a very brief outline of a possible

b) At least four-card support for system often choose to use a 3NT scheme of responses:

The advantages of playing this system are no shortage and about 12-15 HCP. at least 5-4.

numerous. Let’s consider just a few: When you stop to think about the 3™/3´ = extra values,

merits (?!) of this system, it should not usually six trumps.

1. The system is very simple to play. My take long to realise that it is clearly 3NT = 15+ balanced,

only observation is to remind you awful to have to start your slam forcing.

that it does not apply after passing investigations at such an unneces- New suit at 4 level = Splinter.

initially or after intervention. sarily high level – much better to 4™/4´ = Weakest bid

simply start with 2NT and await available (shows a

2. It takes enormous pressure off other developments a whole level lower! poorish minimum

sequences, such as the dreaded without good

‘Delayed Game Raise’ sequences so 5. An optional extra for those using controls).

holding the hand below: cision into direct Splinter raises, since I urge you to ditch archaic methods such

the 3NT bid is otherwise redundant. as the Baron 2NT and introduce Jacoby to

´ AQ72 With work you can show either voids your armoury! r

interested club and county event organisers to view at www.ebu.co.uk/