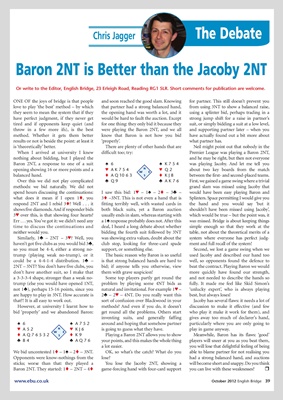 Baron 2NT is Better than the Jacoby 2NT

ONE OF the joys of bridge is that people and soon reached the good slam. Knowing for partner. This still doesn’t prevent you

love to play ‘the best’ method – by which that partner had a strong balanced hand, from using 3NT to show a balanced raise,

they seem to mean the system that if they the opening hand was worth a lot, and it using a splinter bid, perhaps trading in a

have perfect judgment, if they never get would be hard to fault the auction. Except strong jump shift for a raise in partner’s

tired and if opponents keep quiet (and for one thing: they only bid it because they suit, or simply bidding a suit at a low level,

throw in a few more ifs), is the best were playing the Baron 2NT, and we all and supporting partner later – when you

method. Whether it gets them better know that Baron is not how you bid have actually found out a bit more about

results or not is beside the point: at least it ‘properly’. what partner has.

is ‘theoretically’ better. There are plenty of other hands that are Neil might point out that nobody in the

When I arrived at university I knew difficult too; try: Premier League was playing a Baron 2NT,

nothing about bidding, but I played the and he may be right, but then not everyone

™ Q2 about two key boards from the match

Over this we did not play complicated ® Q9 ® AK76 First, we gained a game swing where a trivial

methods: we bid naturally. We did not grand slam was missed using Jacoby that

what does it mean if I open 1t, you 3t –3NT. This is not even a hand that is Splinters. Space permitting I would give you

respond 2NT and I rebid 3t? Well . . . it fitting terribly well, with wasted cards in the hand and you would say ‘but it

shows five diamonds. And if responder bids both black suits, yet a Baron auction shouldn’t have been missed using Jacoby’,

3™ over this, is that showing four hearts? usually ends in slam, whereas starting with which would be true – but the point was, it

Err . . . yes. You’ve got it: we didn’t need any a 1´ response probably does not. After this was missed. Bridge is about keeping things

time to discuss the conti n uations and deal, I heard a long debate about whether simple enough so that they work at the

neither would you. bidding the fourth suit followed by 3NT table, not about the theoretical merits of a

Similarly, 1® – 2NT – 3™? Well, you was showing extra values, doubt about the system where everyone has perfect judg-

haven’t got five clubs as you would bid 3®, club stop, looking for three-card spade ment and full recall of the system!

so you must be 4-4, either a strong no- support, or something else. Second, we lost a game swing when we

trump (playing weak no-trump), or it The basic reason why Baron is so useful used Jacoby and described our hand too

could be a 4-4-1-4 distribution. 1® – is that strong balanced hands are hard to well, so opponents found the defence to

2NT – 3NT? You don’t have five clubs, you bid; if anyone tells you otherwise, view beat the contract. Playing Baron we would

don’t have another suit, so I make that them with grave suspicion! more quickly have found our strength,

a 3-3-3-4 shape, stronger than a weak no- Some top players partly get round the and not needed to describe the hands so

trump (else you would have opened 1NT, problem by playing some 4NT bids as fully. It made me feel like Skid Simon’s

not 1®), perhaps 15-16 points, since you natural and invitational. For example 1™ – ‘unlucky expert’, who is always playing

that?! It is all easy to work out. sort of confusion over Blackwood in your Jacoby has several flaws: it needs a lot of

However, at university I learnt how to methods? And even if you do, it doesn’t discussion to make it effective (and few

bid ‘properly’ and we abandoned Baron: get round all the problems. Others start who play it make it work for them), and

inventing suits, and generally faffing gives away too much of declarer’s hand,

® 84 ® AQ76 your points, and this makes the whole thing players will sneer at you as you beat them,

a lot easier. you will lose that delightful feeling of being

Opponents were know-nothings from the lose? had a strong balanced hand, and auctions

sticks; worse than that: they played a You lose the Jacoby 2NT, showing a will become short and snappy. Do you think

Baron 2NT. They started: 1t – 2NT – 4t game-forcing hand with four-card support you can live with these weaknesses? r