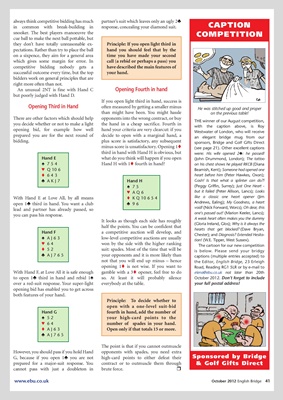 in common with break-building in response, concealing your diamond suit. CAPTION

snooker. The best players manoeuvre the

cue ball to make the next ball pottable, but

they don’t have totally unreasonable ex- Principle: If you open light third in

pectations. Rather than try to place the ball hand you should feel that by the

on a sixpence, they aim for a general area time you have made your second

which gives some margin for error. In call (a rebid or perhaps a pass) you

competitive bidding nobody gets a have described the main features of

successful outcome every time, but the top your hand.

bidders work on general principles that are

right more often than not.

but poorly judged with Hand D.

If you open light third in hand, success is

There are other factors which should help opponents into the wrong contract, or buy

THE winner of our August competition,

you decide whether or not to make a light the hand in a cheap sacrifice. Fourth in with the caption above, is Roy

opening bid, for example how well hand your criteria are very clearcut: if you Westwater of London, who will receive

prepared you are for the next round of decide to open with a marginal hand, a an elegant bridge mug from our

bidding. plus score is satisfactory, any subsequent sponsors, Bridge and Golf Gifts Direct

third in hand with Hand H is obvious, but were: His wife opened 2®: he passed!

Hand E what do you think will happen if you open (John Drummond, London); The tattoo

´ 754 Hand H with 1t fourth in hand? on his chest shows he played RKCB (Diana

you can pass his response.

A weak heart often makes you the dummy

It looks as though each side has roughly

(Gloria Ireland, Glos); Why is it always the

half the points. You can be confident that

hearts that get blocked? (Dave Bryan,

Hand F a competitive auction will develop, and Chester); and Diagnosis? Extended Hesita-

t 52 suit: spades. Most of the time that will be is below. Please send your bridgy

not that you will end up minus – hence the Editor, English Bridge, 23 Erleigh

opening 1t is not wise. If you want to Road, Reading RG1 5LR or by e-mail to

With Hand F, at Love All it is safe enough gamble with a 3t opener, feel free to do elena@ebu.co.uk not later than 20th

to open 1® third in hand and rebid 1´ so. At least it will probably silence October 2012. Don’t forget to include

over a red-suit response. Your super-light everybody at the table. your full postal address!

opening bid has enabled you to get across

both features of your hand.

Principle: To decide whether to

open with a one-level suit-bid

Hand G fourth in hand, add the number of

The point is that if you cannot outmuscle

However, you should pass if you hold Hand opponents with spades, you need extra

G, because if you open 1® you are not high-card points to either defeat their Sponsored by Bridge

prepared for a major-suit response. You contract or to outmuscle them through & Golf Gifts Direct

cannot pass with just a doubleton in brute force. r