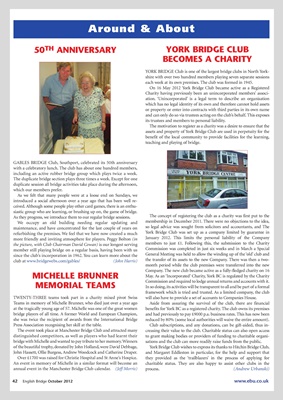 each week at its own premises. The club was formed in 1945.

Charity having previously been an unincorporated members’ associ-

ation. ‘Unincorporated’ is a legal term to describe an organisation

and can only do so via trustees acting on the club’s behalf. This exposes

its trustees and members to personal liability.

benefit of the local community to provide facilities for the learning,

teaching and playing of bridge.

with a celebratory lunch. The club has about one hundred members,

including an active rubber bridge group which plays twice a week.

The duplicate bridge section plays three times a week. Except for one

duplicate session all bridge activities take place during the afternoon,

which our members prefer.

As we felt that many people were at a loose end on Sundays, we

ceived. Although some people play other card games, there is an enthu-

siastic group who are learning, or brushing up on, the game of bridge.

As they progress, we introduce them to our regular bridge sessions. The concept of registering the club as a charity was first put to the

We occupy an old building needing regular updating and membership in December 2011. There were no objections to the idea,

maintenance, and have concentrated for the last couple of years on so legal advice was sought from solicitors and accountants, and The

refurbishing the premises. We feel that we have now created a much York Bridge Club was set up as a company limited by guarantee in

more friendly and inviting atmosphere for players. Peggy Bolton (in January 2012. This limits the personal liability of the Company

the picture, with Club Chairman David Cowan) is our longest serving members to just £1. Following this, the submission to the Charity

member still playing bridge on a regular basis, having been with us Commission was completed in just six weeks and in March a Special

since the club’s incorporation in 1962. You can learn more about the General Meeting was held to allow the winding up of the ‘old’ club and

club at www.bridgewebs.com/gables/ (John Harris) the transfer of its assets to the new Company. There was then a two-

month period while the club premises were transferred into the new

Company. The new club became active as a fully-fledged charity on 16

MICHELLE BRUNNER May. As an ‘Incorporated’ Charity, York BC is regulated by the Charity

Commission and required to lodge annual returns and accounts with it.

MEMORIAL TEAMS In so doing, its activities will be transparent to all and be part of a formal

framework which is tried and trusted. As a limited company, the club

TWENTY-THREE teams took part in a charity mixed pivot Swiss will also have to provide a set of accounts to Companies House.

Teams in memory of Michelle Brunner, who died just over a year ago Aside from assuring the survival of the club, there are financial

at the tragically young age of 57. Michelle was one of the great women benefits for York BC as a registered charity. The club owns its premises

bridge players of all time. A former World and European Champion, and had previously to pay £9000 p.a. business rates. This has now been

she was twice the recipient of awards from the International Bridge reduced by 80% (some local authorities will waive the entire amount).

Press Association recognising her skill at the table. Club subscriptions, and any donations, can be gift-aided, thus in-

The event took place at Manchester Bridge Club and attracted many creasing their value to the club. Charitable status can also open access

distinguished competitors, as well as players who had learnt their to grant making bodies or providers of funding to charitable organi-

bridge with Michelle and wanted to pay tribute to her memory. Winners sations and the club can more readily raise funds from the public.

of the beautiful trophy, donated by John Holland, were David Debbage, York Bridge Club wishes to express its thanks to Hitchin Bridge Club,

John Hassett, Ollie Burgess, Andrew Woodcock and Catherine Draper. and Margaret Eddleston in particular, for the help and support that

Over £1700 was raised for Christie Hospital and St Anne’s Hospice. they provided as the ‘trailblazers’ in the process of applying for

An event in memory of Michelle in a similar format will become an charitable status. They are also happy to assist other clubs in the