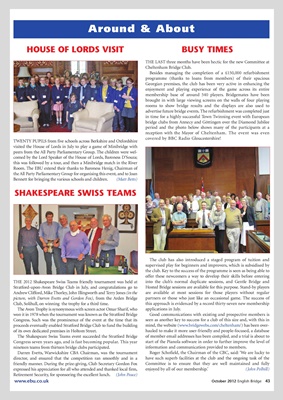 Besides managing the completion of a £150,000 refurbishment

programme (thanks to loans from members) of their spacious

Georgian premises, the club has been very active in enhancing the

enjoyment and playing experience of the game across its entire

membership base of around 540 players. Bridgemates have been

in time for a highly successful Town Twinning event with European

bridge clubs from Annecy and Göttingen over the Diamond Jubilee

reception with the Mayor of Cheltenham. The event was even

TWENTY PUPILS from five schools across Berkshire and Oxfordshire

peers from the All Party Parliamentary Group. The children were wel-

comed by the Lord Speaker of the House of Lords, Baroness D’Souza;

this was followed by a tour, and then a Minibridge match in the River

Room. The EBU extend their thanks to Baroness Henig, Chairman of

the All Party Parliamentary Group for organising this event, and to Joan

Bennett for bringing the various schools and children. (Matt Betts)

The club has also introduced a staged program of tuition and

supervised play for beginners and improvers, which is subsidised by

the club. Key to the success of the programme is seen as being able to

offer these newcomers a way to develop their skills before entering

THE 2012 Shakespeare Swiss Teams friendly tournament was held at into the club’s normal duplicate sessions, and Gentle Bridge and

Stratford-upon-Avon Bridge Club in July, and congratulations go to Hosted Bridge sessions are available for this purpose. Stand-by players

Andrew Clifford, Mike Thorley, John Illingworth and Terry Jones (in the are available at most sessions for those players without regular

picture, with Darren Evetts and Gordon Fox), from the Arden Bridge partners or those who just like an occasional game. The success of

Club, Solihull, on winning the trophy for a third time. this approach is evidenced by a record thirty-seven new membership

The Avon Trophy is synonymous with screen actor Omar Sharif, who applications in July.

Congress. Such was the prominence of the event at the time that its seen as another key to success for a club of this size and, with this in

proceeds eventually enabled Stratford Bridge Club to fund the building mind, the website (www.bridgewebs.com/cheltenham/) has been over-

of its own dedicated premises in Holtom Street. hauled to make it more user-friendly and people-focused, a database

The Shakespeare Swiss Teams event succeeded the Stratford Bridge of member email addresses has been compiled, and a trial is about to

Congress seven years ago, and is fast becoming popular. This year start of the Pianola software in order to further improve the level of

Darren Evetts, Warwickshire CBA Chairman, was the tournament Roger Schofield, the Chairman of the CBC, said: ‘We are lucky to

director, and ensured that the competition ran smoothly and in a have such superb facilities at the club and the ongoing task of the

friendly manner. During the prize-giving, Club Secretary Gordon Fox Committee is to ensure that they are well maintained and fully

expressed his appreciation for all who attended and thanked local firm, enjoyed by all of our membership.’ (John Polhill)