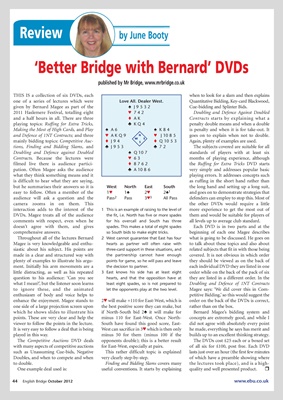 THIS IS a collection of six DVDs, each when to look for a slam and then explains

one of a series of lectures which were Love All. Dealer West. Quantitative Bidding, Key-card Blackwood,

given by Bernard Magee as part of the ´ J9532 Cue-bidding and Splinter Bids.

and a half hours in all. There are three t AK Contracts starts by explaining what a

tions, Finding and Bidding Slams, and ® J953 ® 72 The subjects covered are suitable for all

Contracts. Because the lectures were ™ 63 months of playing experience, although

what they think something means and it playing errors. It addresses concepts such

is difficult to hear what they are saying, as ruffing in the short hand rather than

but he summarises their answers so it is West North East South the long hand and setting up a long suit,

audience will ask a question and the Pass2 Pass 3™3 All Pass defenders can employ to stop this. Most of

camera zooms in on them. This the other DVDs would require a little

DVDs. Magee treats all of the audience the fit, i.e. North has five or more spades them and would be suitable for players of

comments with respect, even when he for his overcall and South has three all levels up to average club standard.

doesn’t agree with them, and gives spades. This makes a total of eight spades Each DVD is in two parts and at the

comprehensive answers. so South bids to make eight tricks. beginning of each one Magee describes

Throughout all of the lectures Bernard 2 West cannot guarantee that East has four what is going to be discussed. He goes on

siastic about his subject. His points are three-card support in these situations, and related subjects that fit in with those being

made in a clear and structured way with the partnership cannot have enough covered. It is not obvious in which order

plenty of examples to illustrate his argu- points for game, so he will pass and leave they should be viewed as on the back of

ment. Initially his arm movements are a the decision to partner. each individual DVD they are listed in one

little distracting, as well as his repeated 3 East knows his side has at least eight order while on the back of the pack of six

question to his audience: ‘Can you see hearts, and that the opposition have at they are listed in a different order. In the

what I mean?’, but the listener soon learns least eight spades, so is not prepared to Doubling and Defence of 1NT Contracts

to ignore these, and the animated let the opponents play at the two level. Magee says: ‘We did cover this in Com-

enthusiasm of body and voice helps to petitive Bidding,’ so this would suggest the

enhance the enjoyment. Magee stands to 2™ will make +110 for East-West, which is order on the back of the DVDs is correct,

one side of a large projection screen upon the best positive score they can make, but rather than on the box.

points. These are very clear and help the minus 110 for East-West. Once North- concepts are extremely good, and while I

viewer to follow the points in the lecture. South have found this good score, East- did not agree with absolutely every point

It is very easy to follow a deal that is being West can sacrifice in 3™ which is then only he made, everything he says has merit and

played in this way. minus 50 for them (minus 100 if the builds up to an excellent thinking strategy.

The Competitive Auctions DVD deals opponents double); this is a better result The DVDs cost £25 each or a boxed set

with many aspects of competitive auctions for East-West, especially at pairs. of all six for £100, post free. Each DVD

such as Unassuming Cue-bids, Negative This rather difficult topic is explained lasts just over an hour (the first few minutes

Doubles, and when to compete and when very clearly step-by-step. of which have a preamble showing where

to double. Finding and Bidding Slams covers many the lectures took place), and is a high-