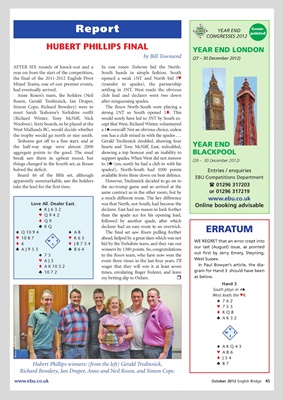 year on from the start of the competition, South hands in simple fashion. South

Mixed Teams, one of our premier events, (transfer to spades), the partnership

had eventually arrived. settling in 3NT. West made the obvious

Simon Cope, Richard Bowdery) were to The Rosen North-South were playing a

Woolven). Sixty boards, to be played at the cept that West, Richard Winter, volunteered

West Midlands BC, would decide whether a 1´ overcall! Not an obvious choice, unless

the trophy would go north or stay south. one has a club mixed in with the spades . . .

Teshome got off to a fine start, and at Gerald Tredinnick doubled, showing four

aggregate points to the good. The meal showing a top honour and an inability to BLACKPOOL

break saw them in upbeat mood, but support spades. When West did not remove

things changed in the fourth set, as Rosen to 2® (yes, surely he had a club in with his

Board 46 of the fifth set, although available from three down on best defence. EBU Competitions Department

apparently unremarkable, saw the holders However, Tredinnick decided to go on to

a much different route. The key difference www.ebu.co.uk

Love All. Dealer East. was that North, not South, had become the Online booking advisable

´ KJ632 declarer. East had no reason to look further

™ Q942 than the spade ace for his opening lead,

t Q9 followed by another spade, after which

® KQ declarer had an easy route to an overtrick.

W E WE REGRET that an error crept into

our last (August) issue, as pointed

´ 75 to the Rosen team, who have now won the out first by Jerry Emery, Steyning,

t A K 10 3 2 wager that they will win it at least seven In Paul Bowyer’s article, the dia-

® 10 7 2 times, emulating Roger Federer, and leave gram for Hand 3 should have been

my betting slip to Oxfam. r as below.