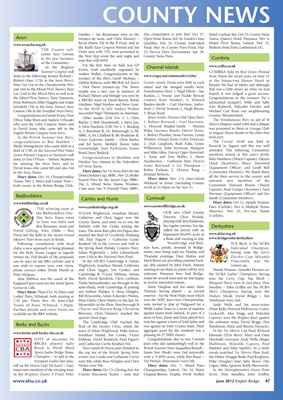 the Next Step event the next night and County Swiss Pairs.

as the new Secretary

For the first time we held two GP www.ccdba.co.uk

Events, both excellently organised by

Anders Wallen. Congratulations to the www.cwgsy.net/community/cicba/

done to the following: Jeremy Rickard – Swiss Teams for seven years on June 24

winners of the Pairs, Geoff Nicholas –

Robert Glass (17th in the Swiss Pairs); at the Stonecross Manor Hotel in

Debbie Roberts, with BBCBA’s Ed Scerri County results: Heats were held in each

Marc Lee (1st in the Championship Pairs Kendal. We had 20 tables and although

– Dick Davey runners-up. The Teams island and the merged results were:

and 2nd in the Mixed Pivot Teams); Katy that was a little down on what we had

trophy was a new one in memory of Simultaneous Pairs: 1. Nigel Elliott – Sue

Lee (2nd in the Mixed Pairs as well as in hoped, it was judged a great success.

Richard Palmer and fittingly was won by Rankin, 2. Svante and Nadde Ryman

the Mixed Pivot Teams); Tony Gammon, Congratulations to the winners (by a

Lawson (5th in the Stratified Swiss Pairs). Michael Cox from our neighbouring

Oliver, Mike Short and Andrew Urbanski The Simultaneous Pairs in aid of St

English Riviera Congress Swiss Pairs. in August. Many thanks to the clubs that

congratulations to Roy Maddon – The County AGM was held in

field of 1780. In the East and West Wales attended. The following Committee

Congratulations to Matthew and 1. Anne and Don Babbe, 2. Marie

for winning the Swiss Pairs, and to Lloyd (Secretary), Bruce Denwood

in the Swiss Teams. (Committee Member). We thank them

Diary dates: Oct 14, Championship all for their service to the county and

THE winning team at

in June was John and County Teams, and went on to win the playing with Jane Kaldewey,

Ros Bateman, Anne and Pachabo with Jon Cooke joining the his regular partner, has sig- Derbyshire

Davis led the field in the recent Grand reached the final of Crockfords, finishing impressive 80.69% score in www.dcba.org.uk

for the Beds Teams League as regards Julian Wightwick – John Liebeschuetz mates, now being used on Tuesday and having won the Gerry

can be seen on the BBA website and if In the NICKO, Cambridge A (Julian Mark Reeve are providing essential back- Vinecombe was the

you wish to express your own views, Wightwick, Jonathan Mestel, Catherine up, ably assisted by John Finch. Anyone runner-up.

please contact either Derek Marsh or and Chris Jagger, Jon Cooke) and wanting to see them in action will be very Wendy Watson – Jennifer Floutier are

Alan Shillitoe was the coach of the Barb, David Kendrick, Chris Larlham, mates for several years and are also happy won the Corey Cup; Sue Birch –

England Open team for the Mind Sports Nadia Stelmashenko) are through to the to receive interested visitors. Margaret Pacey were in 2nd place. Don

Games in Lille. semi-finals, with Cambridge B putting Jenny Vaughan and her sister, Irene Smedley – John Griffin are the DCBA

Diary dates: Thurs Oct 18, Men’s and out Saffron Walden A (Ross Midgley, Thomas, having played – as second Men’s Champions, having won the

Teams of Four, Wilstead, 7.30pm. Meanwhile in the Plate, Peterborough B were invited to play at Fishguard for a Andy Wells and his team-mates

available on the BBA website. Brewster, Chris Heames) reached the against teams from Ireland. As part of a Cockcroft, Alex Hogg and Malcolm

The Cambridge Club reached the matches against a team of Irish ladies and the unbeaten team, David Briggs (Jim

Berks and Bucks final of the Garden Cities, where the two against an Irish County team. Their Tomlinson, Mick and Sheena Haytack).

team of Julian Wightwick, Mike Seaver, aggregate score for the weekend was a In the Vic Morris Cup final, Richard

Champion – to add to the events: Jon Cooke and Catherine Curtis with a 71.89% score, while Ken Keast – Jim Parker (Maggie Beale, Paul Knighton,