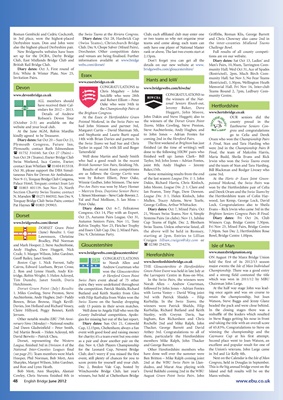 in 3rd place, were the highest-placed Diary dates: Oct 28, Hardwick Cup or two teams so why not organise your and Chris Chowney also came 2nd in

Derbyshire team. Don and John were (Swiss Teams), Christchurch Bridge teams and come along; each team can the inter-counties Midland Teams

New Bridgewebs websites have been Dorchester. Other competition dates rank or above. The last two events start at Full results of all county competi-

set up for the DCBA, Derby Bridge and venues are being finalised. Further 2.15pm. tions are on our website.

Club, East Midlands Bridge Club and information available at www.bridge Don’t forget you can get all the Diary dates: Sat Oct 13, Ladies’ and

www.devonbridge.co.uk Sutcliffe who were 28th CONGRATULATIONS to munity Centre.

have received their Cal- Oake who were 34th in ional Seniors Knock-out,

Robson’s Devon Tour At the Essex & Hertfordshire Green John Dakin and Steve Huggett; also to OUR seniors did the

(October 2–5) are available on the Pointed Weekend, in the Swiss Pairs we the winners of the Dorset Green Point county proud in the

kindly agreed to be Treasurer. and Stephanie and Laurie Burtt equal to John Jones – Adrian Fontes for go to Celia and Derek

Plymouth Congress, Future Inn, the Swiss Teams we had Sue and Chris The first weekend at Brighton has just A Final, Stan and Tara Harding who

Plymouth; contact Ruth Edmondson Taylor in equal 7th with Jill and Roger finished (at the time of writing); well were 2nd in the Championship Pairs B

taneous Pairs for Devon Air Ambulance. are as follows: the George Curtis was Some remaining results from the end came 3rd.

and Essex Club Cup. Dec 2, Mixed Pairs. the above will be held in Romsey, 7.30pm. Sun Dec 2, Hertfordshire Rose

Boston Cup: 1. Nick Forrest, Sally to Norah Allen and www.herefordshirebridge.co.uk held the first of its 2012/13 season

2. Ron and Lynne Heath, Andy Kit- won the Gloucestershire Green Point Event was held in late July at Championship. There was a good entry

Tim Dunsby, Janet Smith, Doris Swiss Pairs event ahead of 75 other In the Swiss Pairs, the winners were which was won in 2011/12 by MBU

1. Miles Cowling, Steve Preston, Steve Butland and Keith Stanley from Glos with Lorna Vestey – David Wing joint ing once again and was on course to

Davies, Jon Holland and Richard Vessey, only 13 points in their seven matches. winners were Patrick Shields, Filip headed the pack and were close behind.

Claire Hillyard, Peggy Bennet, Keith Well done to Angela Hall who won the Kurbalija, Richard Butland and Keith In the closing stages there was a

Other notable results: EBU 75th Anni- gies for missing her out of the last report. Ingham, Ken Richardson and Chris in Steve Baggs getting his nose in front

3rd Martin Brook – Helen Ackroyd, 6th event with good food and raising money Atthey 3rd. Congratulations to all of winning the championship and the

David Berwitz – Patrick Cheu. for charity; it’s a team event but you enter them, particularly the Herefordshire Caymanx Cup at his first attempt.

Dorset, representing the Western as a pair and draw another pair on the members Mike Ralph, John Thacker Second place went to Joan Watson, an

League, finished 3rd in Division A of the day. Nov 4, Club Players Championship and George Barrett. excellent and popular result for one of

(see page 25). Team members were Mark Club; don’t worry if you missed the first have done well over the summer were in 3rd and Liz Kelly 4th.

Hooper, Phil Norman, Bob Mott, Ann event, still plenty of chances for you to Ben Britton – Mike Ralph coming joint Next on the Calendar is the Isle of Man

Sharples, Margot Wilson, John Gardner, score points for yourself and your club. 2nd at the WBU Swiss Pairs in Llan- Congress, held in Douglas in September.

and Ron and Lynn Heath. Dec 2, Bredon Vale Cup, hosted by dudno, and Murat Atac playing with This is the big annual bridge event on the