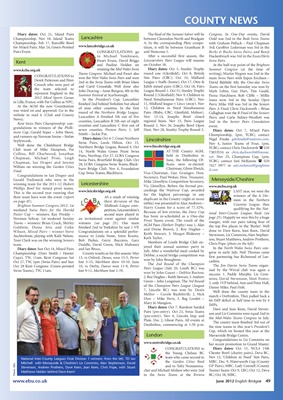 Diary dates: Oct 21, Island Pairs The final of the Samani Salver will be Congress. In One-Day events, David

for Mixed Pairs. Mar 24, Green-Pointed www.lancsbridge.co.uk tition, it will be between Grantham B 3rd; Geoffrey Lederman was 3rd in the

to Michael Tomlinson, After a successful first season, the Hackenbroch was 3rd in the Essex/Herts

Teams Congress. Michael and Ewart also round one (Glenfield). Oct 8, British writing), Martin Nygren was 2nd in the

Crouch who were part of and Carol Croasdale. Well done also Edith mixed pairs (CBC). Oct 18, Pairs Teams on the first Saturday was won by

in Lille, France, with Pat Collins as NPC. finished 2nd behind Yorkshire but ahead 11, Midland league v Lincs (away). Nov Pairs; Mike Hill was 3rd in the Seniors

At the AGM the new Constitution of nine other counties. In the first 12, Children in Need Simultaneous Pairs A Final; Chris Duckworth – Brian

was voted on and approved. Go to the round of the Northern Bridge League, Pairs (Blaby, CBC, Glenfield, Melton). Callaghan won the B Final of the Seniors

website to read it (Club and County Lancashire A finished 5th out of five Nov 13-14, Josephs Bowl closed Pairs; and Carla Sidney-Woollett was

counties and Lancashire C first out of Round 2. Nov 26, Josephs Bowl Open event.

Willans on winning the Garden Cities 7627 0977 or sati.mckenzie@googlema

Gerald Tredinnick who were in the Mike Llewellyn; Competition Secretary, Merseyside/Cheshire

winning team for the 2011-12 Hubert Leicestershire Vic Llewellyn. Before the formal pro- www.mcba.org.uk

This is the second year running that www.leicsbridge.org.uk LAST year, we were the

for the highest percentage in any winners of the A Div-

on page 45). their division of the ision in the Northern

weekend Swiss Pairs for the Harold petition, Leicestershire’s qualifying for the Nat-

has been re-scheduled as a One-day page 25). Happily we won this by a huge

Pivot Teams event. The result of the margin, with our pairs taking four of

Pairs League (July 20, Louth BC) was ised by the Wirral club was again a

Green – John Longmuir. The 3rd Round 2. only 1VP behind, Ann and Peter Hall,

7, Lincoln BC) was won by Denis Well done the county team in the

son and Liz Commins were equal 2nd in

the Mid-Wales Teams Congress in July.

The county team finished 3rd out of

the nine teams in this year’s President’s

Cup, which we hosted this year at the

Congratulations to Liz Commins on

the Young Chelsea BC Chester Bowl (charity pairs), Deva BC.

in the Swiss Teams at the Riviera BC; Oct 18, MBC.