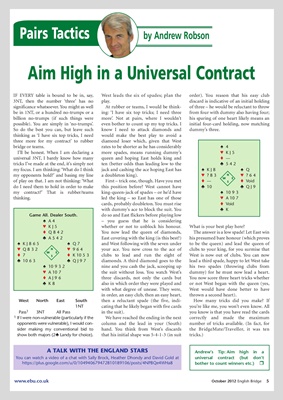 Aim High in a Universal Contract

IF EVERY table is bound to be in, say, West leads the six of spades; plan the order). You reason that his easy club

3NT, then the number ‘three’ has no play. discard is indicative of an initial holding

significance whatsoever. You might as well At rubber or teams, I would be think- of three – he would be reluctant to throw

be in 1NT, or a hundred no-trumps or a ing: ‘I have six top tricks; I need three from four with dummy also having four;

billion no-trumps (if such things were more’. Not at pairs, where I wouldn’t his sparing of one heart likely means an

possible). You are simply in ‘no-trumps’. even bother to count up my top tricks. I initial four-card holding, now matching

So do the best you can, but leave such know I need to attack diamonds and dummy’s three.

thinking as ‘I have six top tricks, I need would make the best play to avoid a

three more for my contract’ to rubber diamond loser which, given that West

bridge or teams. rates to be shorter as he has considerably ´ 4

I’ll be honest. When I am declaring a more spades, means running dummy’s ™ KJ5

universal 3NT, I barely know how many queen and hoping East holds king and t —

tricks I’ve made at the end, it’s simply not ten (better odds than leading low to the ® 542

my focus. I am thinking: ‘What do I think jack and cashing the ace hoping East has ´ KJ8 ´ Q

of play on that. I am not thinking: ‘What First – trick one, though. Have you met t — S t Void

do I need them to hold in order to make this position before? West cannot have ® 10 ® QJ9

with dummy’s ace to block the suit. You ® K

Game All. Dealer South. do so and East flickers before playing low

´ A4 – you guess that he is considering

™ KJ5 whether or not to unblock his honour. What is your best play here?

t Q842 You now lead the queen of diamonds, The answer is a low spade! Let East win

® A542 East covering with the king (is this best?) his presumed bare honour (which proves

t AJ96 three discards, not only the cards but You now score three heart tricks whether

® K8 also in which order they were played and or not West began with the queen (yes,

with what degree of unease. They were, West would have done better to have

in order, an easy club, then an easy heart, thrown a second heart).

West North East South then a reluctant spade (the five, indi- How many tricks did you make? If

1NT cating that he likely began with five cards you’re like me, you won’t even know. All

Pass1 3NT All Pass in the suit). you know is that you have read the cards

opponents were vulnerable), I would con- column and the lead in your (South) number of tricks available. (In fact, for

sider making my conventional bid to hand. You think from West’s discards the BridgeMate/Traveller, it was ten

A TALK WITH THE ENGLAND STARS Andrew’s Tip: Aim high in a

You can watch a video of a chat with Sally Brock, Heather Dhondy and David Gold at universal contract (but don’t