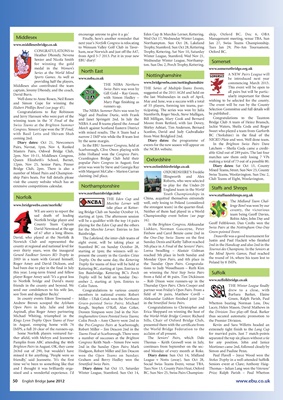 encourage anyone to give it a go.’ Eden Cup & Murchie Lerner, Kettering. ship, Oxford BC. Dec 6, OBA

CONGRATULATIONS to ham, near Norwich and just off the A47, Trophy, Kettering. Sat Nov 10, Saturday Oxford BC.

for winning the gold

medal in the Women’s www.somersetbridge.org.uk

Nottinghamshire A NEW Pairs League will

Sports Games. As well as www.neba.co.uk be introduced next year

Swiss Pairs was won by THE Series of Multiple-Teams Events, This event will be open to

captain, Jeremy Dhondy, and the coach, all pairs but will be partic-

Gill Gold – Ray Green, suggested at the 2011 AGM and held on

David Burn. ularly important for those

with Simon Hedley – the last Wednesdays in each of April,

Well done to Anne Rosen, Neil Rosen wishing to be selected for the county.

Mary Page finishing as May and June, was a success with a total

Congratulations to Ray Robinson be published .

and Janet Springett 2nd. In July the Bill Milligan, Mary Cook and Bernard

winning team in the ‘A’ Final of the Bridge Club A team of Heinz Brunsch,

NEBA A and B teams played the Annual Moore from Retford, with Ian Dovey,

Congress. Simon Cope won the ‘B’ Final, Sweet who played a team from Garforth

with mixed results. The A Team had a Scanlon, David and Judy Cadwallader

narrow 2 IMP win while the B team lost from West Bridgford 2nd.

by the same margin. Diary dates: the programme of

In the EBU Summer Congress, held at events for the new season will appear on

Queen Elizabeth’s School, Barnet, Oxfordshire making a total of 73 out of a possible 80.

visit the county website which has an Roberts, who were selected

extensive competitions calendar. Northamptonshire to play for the Under-20

England team in the World Staffs and Shrops

Norfolk THE Eden Cup and China, acquitted themselves extremely

well, only losing to Poland (considered The Midland Team Chal-

the strongest team) in the quarter-final. lenge Bowl was won by our

WE are sorry to report the Neither of them had played in a World county, the victorious

starting at 1pm. The afternoon session

will be a qualifier with the top 14 pairs

playing for the Eden Cup and the others

for the Murchie Lerner. Entries to Jim

of 67 after a long illness. Finbow and Carol Benzie came 2nd in Green-pointed Event.

David, who played at the Norfolk & the One-Day Swiss Teams on the first Deauville was a good tournament for

The Lakeland, the inter-club teams of

eight event, will be taking place at

county at regional and national level for 5th place in A Final of the Seniors’ Pairs. 2nd in the Handicap and also 2nd in the

Stamford BC on Sunday October 28,

starting at 1pm; the winners will re-

present the county in the Garden Cities

2003 in a team with Gerard himself, Monday Open Pairs, and 4th place in the round of 16, where his team lost to

Trophy. On the same day, the Kettering

Trophy for teams of four will be held at

had been due to play in the final in July Kettering BC, starting at 1pm. Entries to tions to Judy Wesselbaum – Ruth Kim

player Roger Amey said: ‘It’s a great loss Trophy will be held on Sunday Dec- from a field of 46 pairs. Tim Dickinson

to Norfolk bridge and David’s many ember 2, starting at 1pm. Entries to – Rob Dixon were runners-up in the www.suffolkbridge.co.uk

friends in the county and beyond. We Colin Tuton. Thursday Open Pairs. Chris Cooper and THE Winter League finally

send our condolences to his wife Jan, Congratulations to various county partner won Friday’s Open Pairs. From a drew to a close, with

Aspinall, plus Roger Amey partnering Doreen Simpson were 2nd in the Not- Erica Sheppard on winning the heat of the Division Two play-off final. Barker

in August, romping home with 76 the Pre-Congress Pairs at Scarborough; presented them with the certificate from Kevin and Sara Willetts headed an

IMPS, a full 20 clear of the runners-up. Robert Miller – Jim Deacon 2nd in the the World Bridge Federation to the extremely tight finish to the Lang Cup

Some Norfolk players ventured fur- Teams Final at Scarborough. There were acclaim of all present. for married pairs. Just 7 match-points

ther afield, with Melvyn and Jeannette a number of successes at the Brighton The Seniors’ Pairs, which Dale separated the top six places without a tie

Brighton Pairs in August. OK, they came 2nd in the Sunday Open Pairs; Mark continues from September on the sec- Mortimer came 2nd, followed closely by

263rd out of 290, but wouldn’t have Hodgson, Robert Miller and Jim Deacon ond Monday of every month at Roke. Simon and Pauline Penn.

missed it for anything. ‘People were so won the Open Teams on Sunday; Diary dates: Sun Oct 14, Midland Paul Flavell – Joyce Wood won the