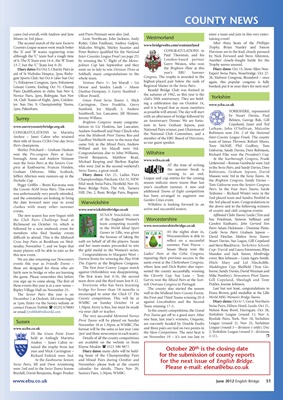 came 2nd overall, with Andrew and Jane and Pyers Pennant were also 2nd. enter a team and join in this very enter-

The second match of the new Eastern Ryder, Giles Faulkner, Andrea Galpin, After three heats of the Phillipps

the ‘A’ and ‘B’ teams registering wins Peter Buttery qualified for the National CONGRATULATIONS to Harrison are in the lead, closely pursued

although the ‘C’ team had a rough time Inter-Counties League Final (see page 25) Paul Thornton, and his by Nick Forward and Steve Allerston.

of it. The ‘A’ Team won 14-6 , the ‘B’ Team by winning the ‘C’ flight of the Metro- London-based partner Another closely-fought battle for the

Leisure Centre. Ending Oct 31: Champ Dewar and Sandra Landy – Alison Regional Master in the Swiss Pairs. booked; put it in your diary for next year!

Novice Pairs, 2pm, Risbygate. Sun Nov Oliver Powell. the autumn of 1962, so this year is the

2pm, Pakenham. Stanford, Joy Mayall; 2. Andrew and it is hoped that as many members

as possible will attend. The day will start YORKSHIRE, represented

with an afternoon of bridge followed by by Stuart Davies, Paul

an Anniversary Dinner. We are fortu- Belsten, George Bak, Gill

nate to have Graham Jepson, past Copeland, Janet and Ted

CONGRATULATIONS to Marietta Andrew Southwell and Peter Clinch who Robinson won Div. 2 of the National

won the Midweek Pivot Teams; Ros and the National Club Committee, and a

Andree – Janet Cahm who retained member of the EBU Board of Directors, Inter-County League Finals. The county

their title of Sussex CCBA One-day Swiss Geoffrey Wolfarth were in the team that team of James Thrower, Robert Myers,

came 3rd; in the Mixed Pairs, Andrew as our guest speaker.

gress at Eastbourne. Frances Hinden, in the Swiss Pairs, and Sandy Davies, Dave

Swiss Teams, a great result. the summer break is

Jeffrey Allerton were runners-up in the Musson were 3rd in the Swiss Teams. At

was unfortunately very poorly attended, Teshome – Richard Winter were in the

has been arranged to augment our

the date forward next year to avoid Warwickshire the 3rd-placed team. Congratulations to

Wiltshire is looking forward to an

The new season has now begun with SUSAN Stockdale, one Affiliated Clubs Teams: Leeds (Tim and

the Club Pairs Challenge final at of the England Women’s Worcestershire Sue Friedman, Simeon Saffman and

members who find Sunday events Games in Lille, was given AS the nights draw in, Castle Swiss Pairs: Graham Jepson –

difficult to attend. This is the Midweek the honour of taking the Worcestershire is able to David Fletcher. Malton Swiss Teams:

Cross Imp Pairs at Bookham on Wed- oath on behalf of all the players. Susan reflect on a successful Stuart Davies, Sue Logan, Gill Copeland

nesday, November 7, and we hope that and her team-mates proceeded to win summer. Pam Pearce – and Steve Blackburn. Yorkshire Schools

many players will be able to join us for the gold medal in the Women’s series. Susan Sharp won the Cup: David and Laura Fennimore, Rhys

We are also renaming our Newcomers Darren Evetts for winning the Play With repeating their previous success in the event: Ben Johnson – Louis Agars-Smith.

events this year as Friendly Events – The Experts at the Brighton Congress. same event at the Cheltenham Congress, Flitch: Mary and Lol Hinchcliffe.

these are designed for those who are The first Inter-County League match where Jane and Dick Rutter also repre- Waddington Cup: Sheffield (Tom Gis-

fairly new to bridge or who are learning against Oxfordshire was disappointing. sented the county successfully, winning borne, Sandy Davies, David Waxman and

you sign up to come along. The first of team drew and the third team lost 8-12. Gervis won the Mixed Pairs at the Scot- Gill Cope land, Sheelagh and Tony

these events this year is at a new venue – Everyone who has been learning tish Overseas Congress in Portugal. Pickles, Joanne Johnson.

Ripley Village Hall on November 25. bridge for fewer than 18 months is The county also started the season Last but not least, congratulations to

The Senior Pairs this year is on encouraged to enter the Chick O’ The well in the Midland Inter-County Events, Fiona Brown, gold medallist at the Lille

December 2 at Oxshott. All events begin County competition. This will be at the First and Third Teams winning 20-0 World MSG Women’s Bridge Teams.

at 1pm. Enter via the Surrey website or WMBC on Sunday October 14 at against Lincolnshire and the Second Diary dates: Oct 6-7, Great Northern

or email f.trebble@ntlworld.com via your club or teacher. In the county competitions, the Grand Nelson Rose Bowl, Harrogate. Oct 28,

The very successful Mentored Novice Prix Teams got off to a good start. After Yorkshire League (round 1); Nov 4,

www.sccba.co.uk format will be the same as last year (one and three pairs are tied on two points in League (round 3 – division 1 only). Dec

‘pro’ and three newcomers in each team). the Slam Competition. The next heat is 2, Yorkshire League (round 3 - divisions

IN the Green Point Event

held at Ardingly Marietta Details of all the county competitions

Andree – Janet Cahm re- are available on the website or from

year and Mick Carrington – Diary dates: many clubs will be hold- October 20th is the closing date

Richard Fedrick were 2nd. ing heats of the Championship Pairs for the submission of county reports

At the Eastbourne Seniors and Mixed Pairs during October and for the next issue of English Bridge.

were 2nd and in the Swiss Teams Jeanne calendar for details. Thurs Nov 29, Please e-mail: elena@ebu.co.uk