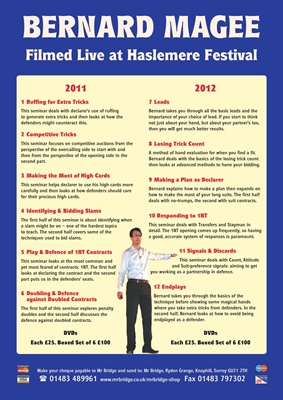 to generate extra tricks and then looks at how the importance of your choice of lead. If you start to think

then you will get much better results.

perspective of the overcalling side to start with and

A method of hand evaluation for when you find a fit.

then from the perspective of the opening side in the

Bernard deals with the basics of the losing trick count

then looks at advanced methods to hone your bidding.

3 Making the Most of High Cards

9 Making a Plan as Declarer

This seminar helps declarer to use his high cards more

for their precious high cards. how to make the most of your long suits. The first half

deals with no-trumps, the second with suit contracts.

The first half of this seminar is about identifying when

to teach. The second half covers some of the detail. The 1NT opening comes up frequently, so having

techniques used to bid slams. a good, accurate system of responses is paramount.

yet most feared of contracts: 1NT. The first half and Suit-preference signals: aiming to get

looks at declaring the contract and the second you working as a partnership in defence.

part puts us in the defenders’ seats.

6 Doubling & Defence Bernard takes you through the basics of the

against Doubled Contracts technique before showing some magical hands

The first half of this seminar explores penalty where you take extra tricks from defenders. In the

defence against doubled contracts. endplayed as a defender.