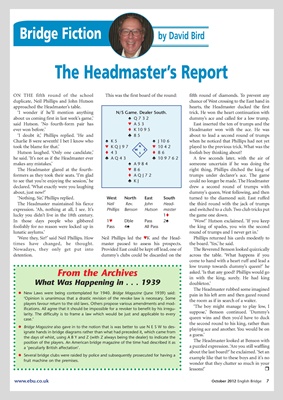 duplicate, Neil Phillips and John Hutson chance of West crossing to the East hand in

‘I wonder if he’ll mention anything N/S Game. Dealer South. trick. He won the heart continuation with

about us coming first in last week’s game,’ ´ Q732 dummy’s ace and called for a low trump.

said Hutson. ‘No fourth-form pair has ™ A53 East inserted the ten of trumps and the

‘I doubt it,’ Phillips replied. ‘He and ® 85 about to lead a second round of trumps

makes any mistakes.’ ´ A984 someone uncertain if he was doing the

The Headmaster glared at the fourth- ™ 86 right thing, Phillips ditched the king of

formers as they took their seats. ‘I’m glad t AQJ72 trumps under declarer’s ace. The game

to see that you’re enjoying the session,’ he ® KJ could no longer be made. The Headmaster

declared. ‘What exactly were you laughing drew a second round of trumps with

about, just now?’ dummy’s queen, West following, and then

The Headmaster maintained his fierce Neil Rev. John Head- the third round with the jack of trumps

expression. ‘Ah, nothing at all, I see. It’s Phillips Benson Hutson master and switched to a club. Two club tricks put

lucky you didn’t live in the 18th century. 1t the game one down.

In those days people who gibbered 1™ Dble Pass 2´ ‘Wow!’ Hutson exclaimed. ‘If you keep

foolishly for no reason were locked up in Pass 4´ All Pass the king of spades, you win the second

lunatic asylums.’ round of trumps and I never get in.’

times have changed, he thought. master paused to assess his prospects. the board. ‘Yes,’ he said.

Nowadays, they only get put into Provided East could be kept off lead, one of The Reverend Benson looked quizzically

detention. dummy’s clubs could be discarded on the across the table. ‘What happens if you

come to hand with a heart ruff and lead a

low trump towards dummy’s queen?’ he

From the Archives asked. ‘Is that any good? Phillips would go

in with the king, surely. He had king

The Headmaster rubbed some imagined

• New Laws were being contemplated for 1940. Bridge Magazine (June 1939) said: pain in his left arm and then gazed round

‘Opinion is unanimous that a drastic revision of the revoke law is necessary. Some

the room as if in search of a waiter.

players favour return to the old laws. Others propose various amendments and mod-

ifications. All agree that it should be impossible for a revoker to benefit by his irregu-

larity. The difficulty is to frame a law which would be just and applicable to every suppose,’ Benson continued. ‘Dummy’s

case.’ queen wins and then you’d have to duck

the second round to his king, rather than

playing ace and another. You would be on

ignate hands in bridge diagrams rather than what had preceded it, which came from

the days of whist, using A B Y and Z (with Z always being the dealer) to indicate the

position of the players. An American bridge magazine of the time had described it as The Headmaster looked at Benson with

a ‘peculiarly British affectation’. a puzzled expression. ‘Are you still waffling

about the last board?’ he exclaimed. ‘Set an

example like that to these boys and it’s no

fruit machine on the premises.

wonder that they chatter so much in your