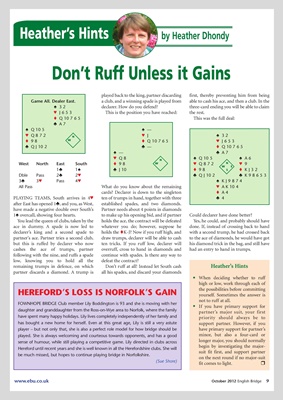 Don’t Ruff Unless it Gains

played back to the king, partner discarding first, thereby preventing him from being

Game All. Dealer East. a club, and a winning spade is played from able to cash his ace, and then a club. In the

´ 32 declarer. How do you defend? three-card ending you will be able to claim

™ J653 This is the position you have reached: the rest.

cards? Declarer is down to the singleton t A4

PLAYING TEAMS, South arrives in 4™ ten of trumps in hand, together with three ® 4

after East has opened 1®, and you, as West, established spades, and two diamonds.

1´ overcall, showing four hearts. to make up his opening bid, and if partner Could declarer have done better?

You lead the queen of clubs, taken by the holds the ace, the contract will be defeated Yes, he could, and probably should have

ace in dummy. A spade is now led to whatever you do; however, suppose he done. If, instead of crossing back to hand

declarer’s king and a second spade to holds the tK-J? Now if you ruff high, and with a second trump, he had crossed back

partner’s ace. Partner tries a second club, draw trumps, declarer will be able to cash to the ace of diamonds, he would have got

but this is ruffed by declarer who now ten tricks. If you ruff low, declarer will his diamond trick in the bag, and still have

cashes the ace of trumps, partner overruff, cross to hand in diamonds and had an entry to hand in trumps.

following with the nine, and ruffs a spade continue with spades. Is there any way to

low, knowing you to hold all the defeat the contract?

remaining trumps in defence, on which Don’t ruff at all! Instead let South cash Heather’s Hints

partner discards a diamond. A trump is all his spades, and discard your diamonds

• When deciding whether to ruff

high or low, work through each of

the possibilities before committing

HEREFORD’S LOSS IS NORFOLK’S GAIN yourself. Sometimes the answer is

not to ruff at all.

daughter and granddaughter from the Ross-on-Wye area to Norfolk, where the family

• If you have primary support for

have spent many happy holidays. Lily lives completely independently of her family and priority should always be to

has bought a new home for herself. Even at this great age, Lily is still a very astute support partner. However, if you

player – but not only that, she is also a perfect role model for how bridge should be have primary support for partner’s

played. She is always welcoming and courteous towards opponents, and has a good minor, but also a four-card or

sense of humour, while still playing a competitive game. Lily directed in clubs across longer major, you should normally

Hereford until recent years and she is well known in all the Herefordshire clubs. She will

begin by investigating the major-

be much missed, but hopes to continue playing bridge in Norfolkshire.

on the next round if no major-suit