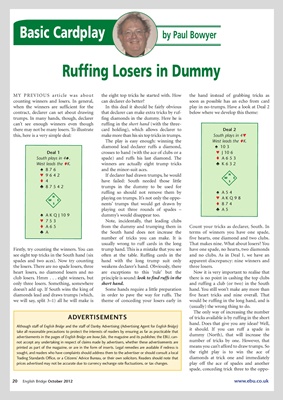 MY PREVIOUS ar ticle was about the eight top tricks he started with. How the hand instead of grabbing tricks as

counting winners and losers. In general, can declarer do better? soon as possible has an echo from card

when the winners are sufficient for the In this deal it should be fairly obvious play in no-trumps. Have a look at Deal 2

contract, declarer can set about drawing that declarer can make extra tricks by ruf- below where we develop this theme:

trumps. In many hands, though, declarer fing diamonds in the dummy. Here he is

there may not be many losers. To illustrate card holding), which allows declarer to Deal 2

this, here is a very simple deal: make more than his six top tricks in trumps. South plays in 4™.

The play is easy enough: winning the West leads the tK.

ruffing so should not remove them by ´ A54

playing on trumps. It’s not only the oppo- ™ AKQ98

S nents’ trumps that would get drawn by t 874

playing out three rounds of spades – ® A5

t A65 from the dummy and trumping them in Count your tricks as declarer, South. In

® A the South hand does not increase the terms of winners you have one spade,

number of tricks you can make. It is five hearts, one diamond and two clubs.

usually wrong to ruff cards in the long That makes nine. What about losers? You

Firstly, try counting the winners. You can trump hand. This is a mistake that you see have one spade, no hearts, two diamonds

see eight top tricks in the South hand (six often at the table. Ruffing cards in the and no clubs. As in Deal 1, we have an

the losers. There are no spade losers, three weakens declarer’s hand. Obviously, there three losers.

heart losers, no diamond losers and no are exceptions to this ‘rule’ but the Now it is very important to realise that

club losers. Hmm . . . eight winners, but principle is sound: look to find ruffs in the there is no point in cashing the top clubs

only three losers. Something, somewhere short hand. and ruffing a club (or two) in the South

doesn’t add up. If South wins the king of Some hands require a little preparation hand. You still won’t make any more than

diamonds lead and draws trumps (which, in order to pave the way for ruffs. The five heart tricks and nine overall. That

we will say, split 3–1) all he will make is theme of conceding your losers early in would be ruffing in the long hand, and is

(usually) the wrong thing to do.

The only way of increasing the number

ADVERTISEMENTS of tricks available is by ruffing in the short

hand. Does that give you any ideas? Well,

it should. If you can ruff a spade in

advertisements in the pages of English Bridge are bona fide, the magazine and its publisher, the EBU, can- dummy (North), that will increase the

not accept any undertaking in respect of claims made by advertisers, whether these advertisements are number of tricks by one. However, that

printed as part of the magazine, or are in the form of inserts. Legal remedies are available if redress is means you can’t afford to draw trumps. So

sought, and readers who have complaints should address them to the advertiser or should consult a local the right play is to win the ace of

Trading Standards Office, or a Citizens’ Advice Bureau, or their own solicitors. Readers should note that diamonds at trick one and immediately

prices advertised may not be accurate due to currency exchange rate fluctuations, or tax changes. play off the ace of spades and another