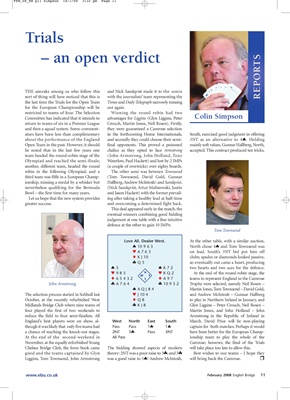 for the European Championship will be out again.

restricted to teams of four. The Selection Winning the round robin had two

Committee has indicated that it intends to advantages for Liggins (Glyn Liggins, Peter Colin Simpson

and then a squad system. Some comment- they were guaranteed a Camrose selection

ators have been less than complimentary in the forthcoming Home Internationals, South, exercised good judgment in offering

about the performance of the England and secondly they could choose their semi- 3NT as an alternative to 4♠. Holding

Open Team in the past. However, it should final opponents. This proved a poisoned mainly soft values, Gunnar Hallberg, North,

be noted that in the last few years one chalice as they opted to face Armstrong accepted. This contract produced ten tricks.

Olympiad and reached the semi-finals; Waterlow, Paul Hackett) and lost by 2 IMPs

another, different team, headed the round (a couple of overtricks) over eighty boards.

robin in the following Olympiad, and a The other semi was between Townsend

ionship, missing a medal by a whisker but Hallberg, Andrew McIntosh) and Sandqvist,

Bowl – the first time for many years. and Jason Hackett) with the former prevail-

greater success. and overcoming a determined fight back.

This deal appeared early in the match, the

judgement at one table with a fine intuitive

defence at the other to gain 10 IMPs:

Love All. Dealer West. At the other table, with a similar auction,

♣Q5 so eventually out came a heart, producing

♥KQ2 At the end of the round-robin stage, the

October, at the recently refurbished West ♦Q8 to play in Northern Ireland in January, and

reduce the field to four semi-finalists. All Armstrong in the Republic of Ireland in

though it was likely that only five teams had Pass Pass 1♣ 1♠ captain for both matches. Perhaps it would

a chance of reaching the knock-out stages. 2NT 3♣ Pass 3NT have been better for the European Champ-

November, at the equally refurbished Young Camrose; however, the final of the Trials

Chelsea Bridge Club, the form book came The bidding showed aspects of modern will take place too late to allow this.

good and the teams captained by Glyn theory: 2NT was a poor raise to 3♣, and 3♣ Best wishes to our teams – I hope they

Liggins, Tom Townsend, John Armstrong was a good raise to 3♠! Andrew McIntosh, will bring back the Camrose.