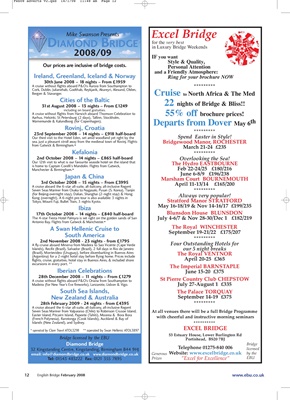 DIAMOND BRIDGE for the very best

Our prices are inclusive of bridge costs. Personal Attention

Cities of the Baltic

including on board gratuities.

Departs from Dover May 6th

Our third visit to the Hotel Eden, set amid woodland yet right by the Spend Easter in Style!

sea, just a pleasant stroll away from the medieval town of Rovinj. Flights Bridgewood Manor, ROCHESTER

is home to Captain Corelli's Mandolin. Flights from Gatwick, The Hydro EASTBOURNE

A Swan Hellenic Cruise to The Royal WINCHESTER

excursions in every port. **

Seven Seas Mariner from Valparaiso (Chile) to Robinson Crusoe Island, At all venues there will be a full Bridge Programme