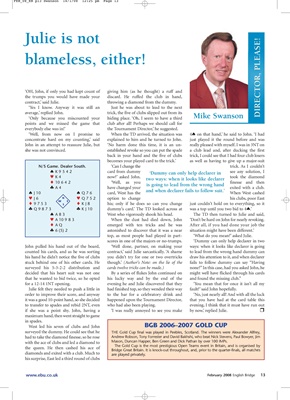 ‘OH, John, if only you had kept count of giving him (as he thought) a ruff and

the trumps you would have made your discard. He ruffed the club in hand,

contract,’ said Julie. throwing a diamond from the dummy.

‘Yes I know. Anyway it was still an Just he was about to lead to the next

average,’ replied John. trick, the five of clubs slipped out from its

‘Only because you miscounted your hiding place. ‘Oh, I seem to have a third Mike Swanson

points and we missed the game that club after all! Perhaps we should call for

everybody else was in!’ the Tournament Director,’ he suggested.

‘Well, from now on I promise to When the TD arrived, the situation was 4♠ on that hand,’ he said to John. ‘I had

concentrate hard on my counting,’ said explained to him and he turned to John. just played it the round before and was

John in an attempt to reassure Julie, but ‘No harm done this time, it is an un- really pleased with myself. I was in 3NT on

she was not convinced. established revoke so you can put the spade a club lead and, after ducking the first

back in your hand and the five of clubs trick, I could see that I had four club losers

becomes your played card to the trick.’ as well as having to give up a major-suit

N/S Game. Dealer South. ‘Can I change the trick. As I couldn’t

♠K9542 card from dummy ‘Dummy can only help declarer in see any solution, I

is going to lead from the wrong hand

♣A4 have changed your exited with a club.

♠ J 10 ♠Q76 card, West has the and when declarer fails to follow suit.’ When West cashed

♠A83 West who vigorously shook his head. The TD then turned to Julie and said,

♦AQ emerged with ten tricks and he was After all, if you had done your job the

♣ 6 (5) 2 astonished to discover that it was a near situation might have been different.’

top, as most people had played in part- ‘What do you mean?’ asked Julie.

scores in one of the majors or no-trumps. ‘Dummy can only help declarer in two

John pulled his hand out of the board, ‘Well done, partner, on making your ways: when it looks like declarer is going

counted his cards, and as he was sorting contract,’ said Julie sarcastically. ‘A shame to lead from the wrong hand dummy can

his hand he didn’t notice the five of clubs you didn’t try for one or two overtricks draw his attention to it, and when declarer

stuck behind one of his other cards. He though.’ (Author’s Note: on the lie of the fails to follow dummy can say “Having

surveyed his 5-3-2-2 distribution and cards twelve tricks can be made.) none?” In this case, had you asked John, he

that he wanted to bid twice, so he opted his lucky way and by the end of the and found the missing club.’’

for a 12-14 1NT opening. evening he and Julie discovered that they ‘You mean that for once it isn’t all my

Julie felt they needed to push a little in had finished top, so they wended their way fault?’ said John hopefully.

order to improve their score, and anyway to the bar for a celebratory drink and ‘No, just nearly all! And with all the luck

it was a good 10-point hand, so she decided happened upon the Tournament Director, that you have had at the card table this

to transfer to spades and rebid 2NT, even who had also been playing. evening, I think that it must have run out

if she was a point shy. John, having a ‘I was really annoyed to see you make by now,’ replied Julie.

surveyed the dummy. He could see that he THE Gold Cup final was played in Peebles, Scotland. The winners were Alexander Allfrey,

had to take the diamond finesse, so he rose Andrew Robson, Tony Forrester and David Bakhshi, who beat Nick Stevens, Paul Bowyer, Jim

with the ace of clubs and led a diamond to Mason, Duncan Happer, Ben Green and Dick Pathan by over 100 IMPs.

The Gold Cup is the most prestigious Open Teams event in Britain, and is organised by

the queen. He then cashed his ace of Bridge Great Britain. It is knock-out throughout, and, prior to the quarter-finals, all matches

diamonds and exited with a club. Much to are played privately.

his surprise, East led a third round of clubs