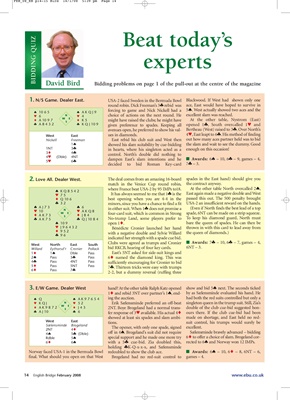 1. N/S Game. Dealer East. USA-2 faced Sweden in the Bermuda Bowl Blackwood. If West had shown only one

round robin. Dick Freeman’s 3♣ rebid was ace, East would have hoped to survive in

♥ 6 N ♥ 4 choice of actions on the next round. He excellent slam was reached.

avenues open, he preferred to show his val- Bertheau (West) raised to 3♣. Over North’s

West East ues in diamonds. 4♥, East leapt to 6♣. His method of finding

1♠ showed his slam suitability by cue-bidding the slam and wait to see the dummy. Good

1NT 3♣ in hearts, where his singleton acted as a enough on this occasion!

control. North’s double did nothing to

2. Love All. Dealer West. The deal comes from an amazing 16-board spades in the East hand) should give you

match in the Venice Cup round robin, the contract anyway.

where France beat USA-2 by 95 IMPs to18. At the other table North overcalled 2♠,

♣ 32 minors, since you have a chance to find a fit USA-2 an insufficient reward on the hands.

♦ J84 four-card suit, which is common in Strong spade, 6NT can be made on a strip squeeze.

with a negative double and Sylvie Willard

indicated her strength with a spade cue bid.

2-2, but a dummy reversal (ruffing three

3. E/W Game. Dealer West hand? At the other table Ralph Katz opened show and bid 5♠ next. The seconds ticked

1♦ and rebid 3NT over partner’s 1♠, end- by as Sælensminde evaluated his hand. He

showed at least six spades and slam ambi- made on shortage, and East held no red-

West East tions. suit control, his trumps would surely be

The opener, with only one spade, signed excellent.

4♠ 5♣ (Dble) off in 4♠. Brogeland’s suit did not require Sælensminde bravely advanced – bidding

Rdble 5♠ special support and he made one more try 6♦ to offer a choice of slam. Brogeland cor-

final. What should you open on that West Brogeland had no red-suit control to games – 4.