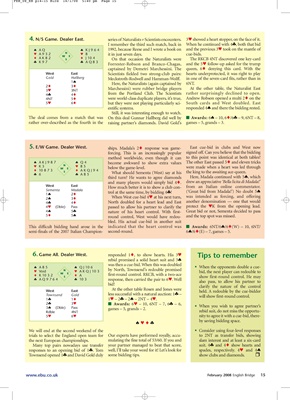 4. N/S Game. Dealer East. series of Naturalists v Scientists encounters. 3♥ showed a heart stopper, on the face of it.

I remember the third such match, back in When he continued with 4♣, both that bid

Forrester-Robson and Branco-Chagas, and the 5♥ follow-up asked for the trump

captained by Demetri Marchessini. The queen, 6♦ denying this card. With the

Gold Hallberg Meckstroth-Rodwell and Hamman-Wolff. in one of the seven-card fits, rather than in

Here, the Naturalists (again captained by

3♥ 3NT Marchessini) were rubber bridge players At the other table, the Naturalist East

4♣ 4♦ from the Portland Club. The Scientists rather surprisingly declined to open.

5♥ 6♦ but they were not playing particularly sci- South cards and West doubled. East

entific systems. responded 4♠ and there the bidding rested.

Still, it was interesting enough to watch.

rather over-described as the fourth in the raising partner’s diamonds. David Gold’s games – 5, grands – 3.

forcing. This is an increasingly popular signed off. Can you believe that the bidding

method worldwide, even though it can to this point was identical at both tables?

W E below the game-level. were made when a heart was led through

♣ A85 What should Sementa (West) say at his the king to the awaiting ace-queen.

third turn? He wants to agree diamonds Here, Madala continued with 5♠, which

and many players would simply bid 4♦. drew an appreciative ‘Bella licita di Madala!’

West East How much better it is to show a club con- from an Italian online commentator.

trol at the same time, by bidding 4♣!

2♠ 3♦ When West cue-bid 4♥ at his next turn, was intended as forcing, and offering

4♥ (Dble) Pass passed to allow his partner to clarify the protect the ♥K from the opening lead.

4♠ 5♣ nature of his heart control. With first- Great bid or not, Sementa decided to pass

5♦ 5♠ round control, West would have redou- and the top spot was missed.

bled. His actual cue-bid in another suit

was then a cue-bid. When this was doubled

A K Q J 10 3 by North, Townsend’s redouble promised • When the opponents double a cue-

bid, the next player can redouble to

bid! clarify the nature of the control

West East At the other table Rosen and Jones were held. A redouble by the cue-bidder

Rdble 4NT rebid suit, do not miss the opportu-

trials to select the England open team for Our experts have performed royally, accu- to 2NT as transfer bids, showing

the next European championships. mulating the fine total of 53/60. If you and slam interest and at least a six-card

Many top pairs nowadays use transfer your partner managed to beat that score, suit. 4♣ and 4♦ show hearts and

responses to an opening bid of 1♣. Tom well, I’ll take your word for it! Let’s look for spades, respectively. 4♥ and 4♠