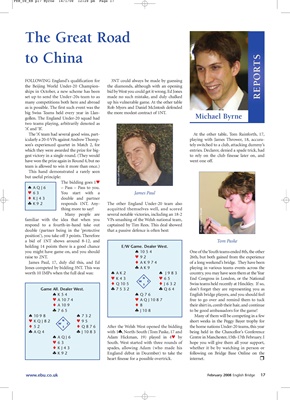 the Beijing World Under-20 Champion- the diamonds, although with an opening

ships in October, a new scheme has been bid by West you could get it wrong. Ed Jones

set up to send the Under-20s team to as made no such mistake, and duly chalked

many competitions both here and abroad up his vulnerable game. At the other table

as is possible. The first such event was the Rob Myers and Daniel McIntosh defended

gollen. The England Under-20 squad had Michael Byrne

The ‘A’ team had several good wins, part- At the other table, Tom Rainforth, 17,

son’s experienced quartet in Match 2, for tely switched to a club, attacking dummy’s

which they were awarded the prize for big- entries. Declarer, denied a spade trick, had

gest victory in a single round. (They would to rely on the club finesse later on, and

have won the prize again in Round 4, but no went one off.

team is allowed to win it more than once.)

This hand demonstrated a rarely seen

♥63 You start with a James Paul

♣K92 responds 1NT. Any- The other England Under-20 team also

thing more to say? acquitted themselves well, and scored

Many people are several notable victories, including an 18-2

familiar with the idea that when you VPs smashing of the Welsh national team,

respond to a fourth-in-hand take out captained by Tim Rees. This deal showed

double (partner being in the ‘protective that a passive defence is often best:

position’), you take off 3 points. Therefore

Jones competed by bidding 3NT. This was ♣AK9 playing in various teams events across the

♠K54 ♠Q76 English bridge players, and you should feel

♥95 short weeks in the Peggy Bayer trophy for

♦ 52 S ♦Q876 After the Welsh West opened the bidding the home nations Under-20 teams, this year

♥63 South. West started with three rounds of hope you will give them all your support,

♦KJ43 spades, allowing Adam (who made his whether it be by watching in person or