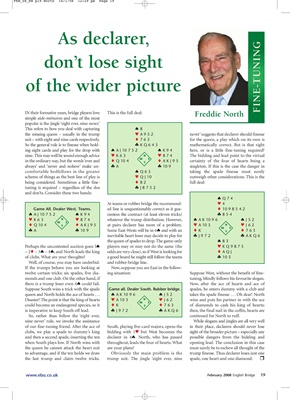 of the wider picture

simple aide-mémoires and one of the most

This is the full deal:

popular is the jingle ‘eight ever, nine never.’

This refers to how you deal with capturing ♠ 8

suit – with eight and nine cards respectively. ♦ 763 for the queen, a play which on its own is

So the general rule is to finesse when hold- ♣ KQ643 mathematically correct. But is that right

nine. This may well be sound enough advice ♥ K63 N ♥ 874 The bidding and lead point to the virtual

scheme of things as the best line of play is ♥ Q J 10 outweigh other considerations. This is the

tuning is required – regardless of the dos ♣ J8752

and don’ts. Consider these two hands:

At teams or rubber bridge the recommend- ♥ 4

inevitable heart loser may decide to play for ♣ J972 ♣ AKQ6

the queen of spades to drop. The game-only ♠ 83

Perhaps the uncontested auction goes: l♠ players may or may not do the same (the ♥ KQ9875

Well, of course, you may have underbid. and rubber-bridge line.

If the trumps behave you are looking at Now, suppose you are East in the follow-

monds and one club. On the other hand, if tuning, blindly follows his favourite slogan.

there is a trump loser even 4♠ could fail. Now, after the ace of hearts and ace of

Suppose South wins a trick with the spade Game all. Dealer South. Rubber bridge. spades, he enters dummy with a club and

♥J62 wins and puts his partner in with the ace

could become an endangered species, so it ♦K S ♦763 of diamonds to cash his king of hearts;

is imperative to keep South off lead. ♣J972 ♣AKQ6 then, the final nail in the coffin, hearts are

So, rather than follow the ‘eight ever, continued for North to ruff.

nine never’ rule, we invoke the assistance While slogans and jingles are all very well

of our fine-tuning friend. After the ace of South, playing five-card majors, opens the in their place, declarers should never lose

clubs, we play a spade to dummy’s king bidding with 1♥ but West becomes the sight of the broader picture – especially any

and then a second spade, inserting the ten declarer in 4♠. North, who has passed possible dangers from the bidding and

when South plays low. If North wins with throughout, leads the four of hearts. What opening lead. The conclusion in this case

the queen he cannot attack the heart suit are your plans? must surely be to eschew all thought of the

to advantage, and if the ten holds we draw Obviously the main problem is the trump finesse. Thus declarer loses just one

the last trump and claim twelve tricks. trump suit. The jingle ‘eight ever, nine spade, one heart and one diamond.