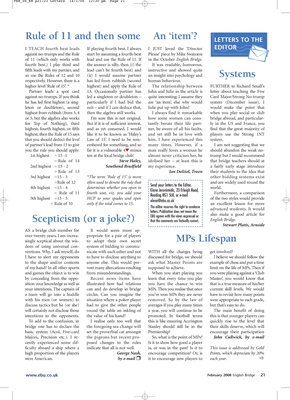 Rule of 11 and then some An ‘item’? LETTERS TO THE

of 11 (which only works with lead and use the Rule of 11. If in the October English Bridge.

fourth best.) I play third and the answer is silly, then (i) the It was readable, humorous,

fifth leads with my partner, and lead can’t be fourth best) and instructive and showed quite

respectively. However, there is a

(ii) I would assume partner

has led from rubbish (second

an insight into psychology and

higher-level ‘Rule of 15’. * highest) and apply the Rule of The relationship between FURTHER to Richard Small’s

Partner leads a spot card 13. Occasionally partner has John and Julie in the article is letter about teaching the Five

against no-trumps. If you think led a singleton or doubleton – quite interesting; I assume they Card Major/Strong No-trump

he has led first highest (a sing- particularly if I had bid the are ‘an item’, else why would system (December issue), I

leton or doubleton), second suit – and if I can deduce that, Julie put up with John? would make the point that

highest from rubbish (from 3, 4 then the algebra still works. I always find it remarkable when you play social or club

or 5, but the algebra also works I’m sure this is not original. how some women can cons- bridge abroad, and particular-

for Top of Nothing), third But if it is of sufficient interest, tantly berate their life part- ly in the US and France, you

highest, fourth highest, or fifth and as yet unnamed, I would ner, be aware of all his faults, find that the great majority of

highest, then the Rule of 15 says like it to be known as ‘Haley’s and yet still be in love with players use the Strong 1NT

that you should deduct the level Law of 15’. I need to be rem- him. I have experienced this system.

of partner’s lead from 15 to give embered for something, and so many times. However, if a I am not suggesting that we

you the rule you should apply: far it is a vulnerable 4♥ minus man really loves a woman he should abandon the weak no-

1st highest = 15 -1 ten at the local bridge club! almost never criticises her, he trump but I would recommend

= Rule of 14 Steve Haley, idolised her – at least this is that bridge teachers should at

= Rule of 13 Ian Dalziel, Troon their students to the idea that

4th highest =15 - 4 determines whether you open in world.

= Rule of 11 fourth seat, viz. you add your Furthermore, a comparison

= Rule of 10 only if the total comes to 15. an excellent lesson for more

The editor reserves the right to condense

advanced students. It would

letters. Publication does not mean the

Scepticism (or a joke?) that the comments are factually correct. English Bridge.

AS a bridge club member for It would seem more ap-

over twenty years, I am increa- propriate for a pair of players

dom of using universal con- system of bidding to commu-

ventions. Why, I ask myself, do nicate with each other and not WITH all the changes being get involved?

I have to alert my opponents to have to disclose anything to discussed for bridge, we should I believe we should follow the

to the shape and/or contents anyone else. This would pre- ask what Master Points are example of chess and put a time

of my hand? In all other sports vent many altercations resulting supposed to achieve. limit on the life of MPs. Then if

and games the object is to win from misunderstandings. When you start playing you you were playing against a ‘Club

by concealing from the oppo- Recent news items have learn that every time you play Master’, you would know that

your intentions. The captain of can and do develop in bridge MPs. Then you realise that once current skill levels. We would

a team will go into a huddle circles. Can you imagine the you’ve won MPs they are never have to revisit how many points

with his men (or women) to situation where a poker player removed. So by the law of were appropriate to each grade,

discuss tactics but he (or she) had to give the other people averages if you play many times but that’s easy to do.

will certainly not disclose those round the table an inkling of a year, you will continue to be The main benefit of doing

intentions to the opponents. the value of his hand? promoted. In football terms this is that younger players can

To add to the confusion, in I realise only too well that this is like ensuring Accrington quickly rise to the level that

bridge one has to declare the the foregoing sea change will Stanley should still be in the their skills deserve, which will

Majors, Precision etc.). I re- the pigeons but recent pro- So, what is the point of MPs? John Cullwick, by e-mail

ficulty aboard a ship where a indicate that all is not well. is, or was in the past? Is it to This issue is addressed by Gold

high proportion of the players George Nash, encourage competition? Or, is Points, which depreciate by 20%

were American. by e-mail it to encourage new players to each year.