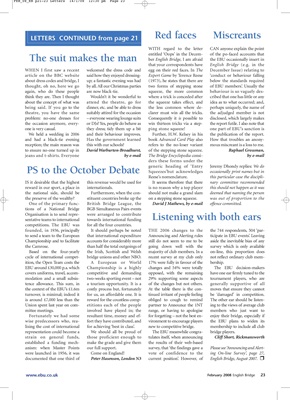 WITH regard to the letter CAN anyone explain the point

entitled ‘Oops’ in the Decem- of the po-faced accounts that

The suit makes the man ber English Bridge, I am afraid

that your correspondents have

the EBU occasionally insert in

English Bridge (e.g. in the

WHEN I first saw a recent welcomed the dress code and egg on their red faces. In The December Issue) relating to

about dress codes and bridge, I up; a fantastic evening was had (1973), he states that there are below the standards required

thought, oh no, here we go by all. All our Christmas parties two forms of stepping stone of EBU members’. Usually the

again, who do these people are now black-tie. squeeze, the more common behaviour is so vaguely des-

think they are. Then I thought Wouldn’t it be wonderful to where a trick is conceded after cribed that one has little or any

about the concept of what was attend the theatre, go for the squeeze takes effect, and idea as to what occurred; and,

being said. If you go to the dinner, etc. and be able to dress the less common where de- perhaps uniquely, the name of

theatre, you have the same suitably attired for the occasion clarer must win all the tricks. the adjudged member is not

problem: no-one dresses for – everyone wearing lounge suits Consequently it is possible to disclosed, which largely makes

the occasion anymore, every- or DJs? Yes, people do behave as win thirteen tricks via a step- the report futile. I also note that

one is very casual. they dress; tidy them up a bit ping stone squeeze! one part of EBU’s sanction is

We held a wedding in 2006 and their behaviour improves. Further, H.W. Kelsey in his the publication of the report.

reception; the main reason was this with our schools? refers to the no-loser variant mous miscreant is a loss to me.

to ensure no-one turned up in David Warburton-Broadhurst, of the stepping stone squeeze. Raphael Grossman,

jeans and t-shirts. Everyone by e-mail The Bridge Encyclopedia consi- by e-mail

ders these forms under the

generic heading of ‘Entry Jeremy Dhondy replies: We do

occasionally print names but in

this particular case the discipli-

reward in our sport, a place in internationals. is no reason why a top player this should not happen as it was

the national side, should be Furthermore, when the con- should not make a grand slam deemed that naming the person

the preserve of the wealthy? stituent countries broke up the on a stepping stone squeeze. was out of proportion to the

One of the primary func- British Bridge League, the David J Mathews, by e-mail offence committed.

Organisation is to send repre-

were arranged to contribute

towards international funding Listening with both ears

competitions. The EBU was for all the four countries.

to send a team to the European that international expenditure Announcing and Alerting rules ticipate in EBU events’. Leaving

the Camrose. than half the total outgoings of going down well with the survey which is only available

Based on the four-yearly the Irish, Scottish and Welsh majority of club members. In a on-line, this proportion does

cycle of international compet- bridge unions and other NBO. recent survey at my club only not reflect ordinary club mem-

ition, the Open Team costs the A European or World 17% were fully in favour of the bership.

EBU around £30,000 p.a. which Championship is a highly changes and 54% were totally The EBU decision-makers

covers uniforms, travel, accom- competitive and demanding opposed, with the remaining have one ear firmly tuned to the

modation and a small subsis- two-weeks sporting event – not 29% supporting some aspects tournament players, who are

tence allowance. This sum, in a tourism opportunity. It is a of the changes but not others. generally supportive of all

the context of the EBU’s £1.6m costly process but, fortunately At the table there is the con- moves that ensure they cannot

turnover, is minimal; indeed it for us, an affordable one. It is tinued irritant of people feeling be ‘damaged’ in competition.

is around £7,000 less than the reward for the countless comp- obliged to cough to remind The other ear should be listen-

mittee meetings. involved have played in; the range, or having to apologise members who just want to

Fortunately we had some resultant time, money and ef- for forgetting – not the best en- enjoy their bridge, especially if

wise predecessors who, rea- fort they have contributed, and vironment to encourage players the EBU plans to widen its

lising the cost of international for achieving ‘best in class’. new to competitive bridge. membership to include all club

representation could become a We should all be proud of The EBU meanwhile congra- bridge players.

strain on general funds, those proficient enough to tulates itself, when announcing Cliff Short, Rickmansworth

anism: when Master Points our full support. survey, that ‘the findings gave a Please see ‘Announcing and Alert-

were launched in 1956, it was Come on England! vote of confidence to the ing On-line Survey’, page 27,

documented that one third of Peter Hasenson, London N3 current position’. However, of English Bridge, August 2007.