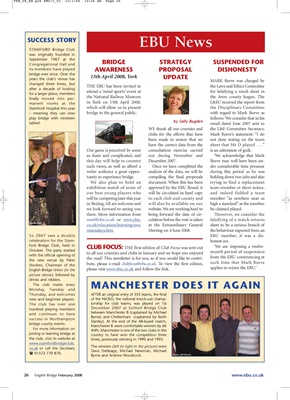 was originally founded in

bridge ever since. Over the

years the club’s venue has

THE EBU has been invited to the Laws and Ethics Committee

after a decade of looking

for a larger place, members

finally moved into per- the National Railway Museum the Avon county league. The

manent rooms at the in York on 13th April 2008, L&EC received the report from

– meaning they can now bridge to the general public. with regard to Mark Reeve as

play bridge with nineteen follows: ‘We consider that in his

WE thank all our counties and the L&E Committee Secretary,

clubs for the efforts that have Mark Reeve’s statement: “I do

have the correct data from the sheet that Mr D played . . .”

Our game is perceived by some consultation exercise carried is an admission of guilt.

as dusty and complicated, and out during November and ‘We acknowledge that Mark

this day will help to counter December 2007. Reeve may well have been un-

such views, as well as afford a Once we have completed the der considerable time pressure

wider audience a great oppor- analysis of the data, we will be during this period as he was

We also plan to hold an document. When this has been trying to find a replacement

exhibition match of some of approved by the EBU Board, it team-member at short notice,

in Beijing. All are welcome and will also be available on our high a standard” as the member

we look forward to seeing you website. We are working hard to he claimed played.

there. More information from bring forward the date of cir- ‘However, we consider the

co.uk/education/learning/awa at the Extraordinary General sheet to be a serious breach of

renessdays.htm Meeting on 4 June 2008. the behaviour expected from an

celebration for the Stam- honest act.

CLUB FOCUS: THE first edition of Club Focus was sent out ‘We are imposing a twelve-

with the official opening of

the read! This newsletter is for you, so if you would like to contri- from the EBU commencing at

the new venue by Peter

English Bridge Union (in the please visit www.ebu.co.uk and follow the link. applies to rejoin the EBU.’

picture above), followed by

The club meets every

MANCHESTER DOES IT AGAIN

Thursday, and welcomes AFTER an original entry of 355 teams, the final

new and beginner players. of the NICKO, the national knock-out champ-

The club has over one ionship for club teams, was played on 1st

and continues to have between Manchester B (captained by Michael

Byrne) and Cheltenham (captained by Keith

Manchester B were comfortable winners by 66

For more information on IMPs. Manchester is one of the two clubs in the

The winners (left to right in the picture) were

co.uk or call the Secretary