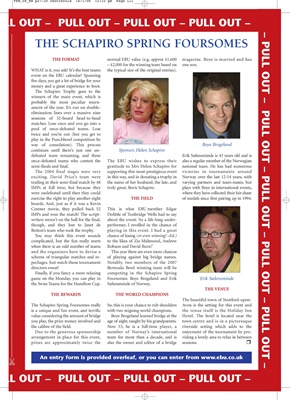 THE FORMAT normal EBU value (e.g. approx £1,600 magazine. Boye is married and has

WHAT is it, you ask? It’s the best teams the typical size of the original entries).

event on the EBU calendar! Spanning

five days, you get a lot of bridge for your

money and a great experience to boot.

The Schapiro Trophy goes to the

winners of the main event, which is

probably the most peculiar tourn-

ament of the year. It’s run on double-

elimination lines over a massive nine

sessions of 32-board head-to-head

matches. Lose once and you go into a

twice and you’re out (but you get to

play in the Punchbowl competition by

defeated team remaining, and three Erik Sælensminde is 43 years old and is

semi-finals and final. gratitude to Mrs Helen Schapiro for national team. He has had numerous

exciting. David Price’s team were in this way, and in donating a trophy in Norway over the last 12-14 years, with

trailing in their semi-final match by 48 the name of her husband, the late, and varying partners and team-mates, but

IMPs at full time, but because they truly great, Boris Schapiro. plays with Boye in international events,

exercise the right to play another eight THE FIELD of medals since first pairing up in 1994.

boards. And, just as if it was a Kevin

Costner movie, they pulled back 52 This is what EBU member Edgar

IMPs and won the match! The script- Dolittle of Tunbridge Wells had to say

writers weren’t on the ball for the final, about the event: ‘As a life-long under-

though, and they lost to Janet de performer, I revelled in the chance of

Botton’s team who took the trophy. playing in this event. I had a great

You may think this event sounds chance of losing (or even winning! –Ed.)

complicated, but the fun really starts to the likes of Zia Mahmood, Andrew

when there is an odd number of teams Robson and David Burn!’

scheme of triangular matches and re- of playing against big bridge names.

pechages. Just watch those tournament Notably, two members of the 2007

Finally, if you fancy a more relaxing competing in the Schapiro Spring

game on the Monday, you can play in Foursomes: Boye Brogeland and Erik Erik Sælensminde

the Swiss Teams for the Hamilton Cup. Sælensminde of Norway.

THE REWARDS THE WORLD CHAMPIONS

The beautiful town of Stratford-upon-

The Schapiro Spring Foursomes really So, this is your chance to rub shoulders Avon is the setting for this event and

is a unique and fun event, and terrific with two reigning world champions. the venue itself is the Holiday Inn

value considering the amount of bridge Boye Brogeland learned bridge at the Hotel. The hotel is located near the

you play, the prize money involved and age of eight, taught by his grandparents. town centre and is in a picturesque

the calibre of the field. Now 33, he is a full-time player, a riverside setting which adds to the

arrangement in place for this event, team for more than a decade, and is viding a lovely area to relax in between

prizes are approximately twice the also the owner and editor of a bridge sessions.

An entry form is provided overleaf, or you can enter from www.ebu.co.uk