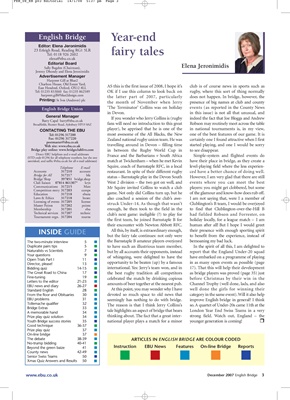 East Hendred, Oxford, OX12 8LL AS this is the first issue of 2008, I hope it’s club is of course news in sports such as

the latter part of 2007, particularly does not happen. In bridge, however, the

in Devon. in this issue) is not all that unusual, and

Broadfields, Bicester Road, Aylesbury HP19 8AZ fans will need no introduction to this great Robson may routinely meet across the table

CONTACTING THE EBU player), be apprised that he is one of the in national tournaments is, in my view,

Fax: 01296 317220 Zealand national rugby union team. He was certainly one I found attractive when I first

Web site: www.ebu.co.uk travelling around in Devon – filling time started playing, and one I would be sorry

Bridge play online: www.bridgeclublive.com in between the Rugby World Cup in to see disappear.

(STD code 01296 for all telephone numbers, bar the one

asterisked, and suffix @ebu.co.uk for all e-mail addresses) match at Twickenham – when he met Kevin have their place in bridge, as they create a

Telephone E-mail Squire, coach of Barnstaple RFC, in a local level-playing field where the less experien-

Accounts 317210 account restaurant. In spite of their different rugby ced have a better chance of doing well.

status – Barnstaple play in the Devon South However, I am very glad that there are still

Communications 317215 Matt Mr Squire invited Collins to watch a club players: you might get clobbered, but some

Education 317218 ebuta game. Not only did Collins turn up, but he of the glamour and know-how does rub off.

Laws & Ethics 317218 lecsec also coached a session of the club’s awe- I am not saying that, were I a member of

Master Points 317202 points struck Under-14. As though that wasn’t Clublington’s B team, I would be overjoyed

Membership 317201 ebu enough, he then took to the field in the to find that Clublington-over-the-Hill B

Technical services 317207 technic club’s next game: ineligible (?) to play for had fielded Robson and Forrester, on

the first team, he joined Barnstaple B for holiday locally, for a league match – I am

their encounter with Newton Abbott RFC. human after all! But I hope I would greet

All this, by itself, is extraordinary enough, their presence with enough sporting spirit

INSIDE GUIDE but the fairy tale continues: not only were to benefit from the experience, instead of

The two-minute interview 5 the Barnstaple B amateur players overjoyed bemoaning my bad luck.

Duplicate pairs tips 5 to have such an illustrious team member, In the spirit of all this, I am delighted to

Naturalists vs Scientists 7 but by all accounts their opponents, instead report that the England Under-20 squad

of whingeing, were delighted to have the have embarked on a programme of playing

Director, please! 13 opportunity to be beaten (up) by a famous in as many open events as possible (page

Bidding quiz 14-15 international. Yes: Jerry’s team won, and in 17). That this will help their development

amounts of beer together at the nearest pub. Channel Trophy (well done, lads, and also

Standard English 28 At this point, you may wonder why I have well done the girls for winning their

From the floor and Obituaries 30 devoted so much space to old news that category in the same event). Will it also help

EBU problems 31 seemingly has nothing to do with bridge. improve English bridge in general? I think

Tollemache qualifier 32 The reason is that I think Jerry Collins’s so. A quartet of Under-20s came 11th at the

Prize play quiz solution 34 thinking about. The fact that a great inter- strong field. Watch out, England – the

The debate 38-39 ARTICLES IN ENGLISH BRIDGE ARE COLOUR CODED