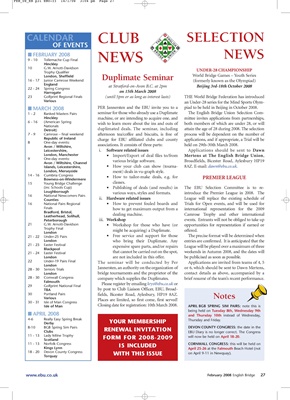 Various an Under-28 series for the Mind Sports Olym-

s MARCH 2008 PER Jannersten and the EBU invite you to a piad to be held in Beijing in October 2008.

Hinckley machine, or are intending to acquire one, and mittee invites applications from partnerships,

6 - 16 (American Spring wish to learn more about the ins and outs of both members of which are under 28, or will

Detroit) duplimated deals. The seminar, including attain the age of 28 during 2008. The selection

7-9 Camrose – final weekend afternoon tea/coffee and biscuits, is free of process will be dependent on the number of

Republic of Ireland charge for EBU affiliated clubs and county applications, and if appropriate, a Trial will be

Leicestershire, i. Software related issues Applications should be sent to Dawn

Bowness-on-Windermere • How to tailor-make deals, e.g. for PREMIER LEAGUE

various ways, styles and formats. introduce the Premier League in 2008. The

• How to prevent fouled boards and Trials for Open events, and will be used for

Peterborough iii. Workshop events. Entrants will not be obliged to take up

London who bring their Duplimate. Any entries are confirmed. It is anticipated that the

21 - 23 Easter Festival expensive spare parts, and/or repairs League will be played over a maximum of three

21 - 24 Easter Festival that cannot be carried out on the spot, weekends in Autumn 2008, and the dates will

London are not included in this offer. be publicised as soon as possible.

22 Under-19 Pairs Final The seminar will be conducted by Per Applications are invited from teams of 4, 5

28 - 30 Seniors Trials Jannersten, an authority on the organization of or 6, which should be sent to Dawn Mertens,

London bridge tournaments and the proprietor of the contact details as above, accompanied by a

Please register by emailing krys@ebu.co.uk or

s APRIL 2008 and Thursday 10th instead of Wednesday,

11 - 13 Norfolk Congress CORNWALL CONGRESS: this will be held on