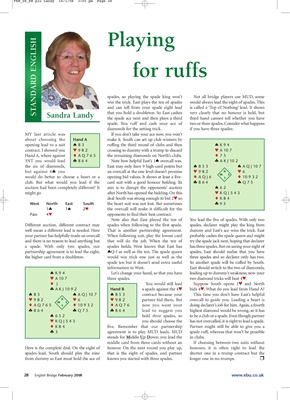 spades, so playing the spade king won’t Not all bridge players use MUD, some

win the trick. East plays the ten of spades would always lead the eight of spades. This

and can tell from your spade eight lead is called a ‘Top of Nothing’ lead. It shows

that you hold a doubleton. So East cashes very clearly that no honour is held, but

spade. You ruff and cash your ace of two or three spades. Consider what happens

diamonds for the setting trick. if you have three spades:

MY last article was If you don’t take your ace now, you won’t

about choosing the Hand A make it. South can set up club winners by

Hand A, where against ♦AQ765 the remaining diamonds on North’s clubs. ♦ 75

auction had been completely different? It aim is to disrupt the opponents’ auction ♠ 62

might go after North has opened the bidding. On this ♥ KQJ543

West North East South the heart suit was not lost. But sometimes ♣ 93

Note also that East played the ten of You lead the five of spades. With only two

Different auction, different contract may spades when following to the first spade. spades, declarer might play the king from

well mean a different lead is needed. Here That is another partnership agreement. dummy and East’s ace wins the trick. East

your partner has helpfully made an overcall When following suit, play the lowest card probably cashes the spade queen and might

and there is no reason to lead anything but that will do the job. When the ten of try the spade jack next, hoping that declarer

a spade. With only two spades, our spades holds, West knows that East has has three spades. But on seeing your eight of

partnership agreement is to lead the eight, ♠Q-J as well as the ten. The spade queen spades, East should realise that you have

the higher card from a doubleton. would win trick one just as well as the three spades and so declarer only has two.

spade ten but it doesn’t send extra useful So another spade will be ruffed by South.

information to West. East should switch to the two of diamonds,

♠ K94 Let’s change your hand, so that you have leading up to dummy’s weakness; now your

♦ J You would still lead Suppose South opens 1♥ and North

♠ 652 hold three spades, so to be a club or a spade. Even though partner

♥ KQJ543 you should choose the has not overcalled, it is right to lead a spade.

♦ K84 five. Remember that our partnership Partner might still be able to give you a

♣ 3 agreement is to play MUD leads. MUD spade ruff, whereas that won’t be possible

stands for Middle Up Down; you lead the in clubs.

Here is the complete deal. On the eight of honour. On the next round you play up, honours, it is often right to lead the

spades lead, South should play the nine that is the eight of spades, and partner shorter one in a trump contract but the

from dummy as East must hold the ace of knows you started with three spades. longer one in no-trumps.