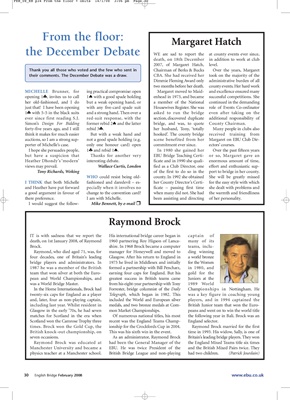 From the floor: Margaret Hatch

the December Debate WE are sad to report the

at county events ever since,

in addition to work at club

Thank you all those who voted and the few who sent in Chairman of Berks & Bucks Over the years, Margaret

their comments. The December Debate was a draw. CBA. She had received her took on the majority of the

Dimmie Fleming Award only administrative burden of all

two months before her death. county events. Her hard work

opening 1♣, invites us to call 1♠ with a good spade holding enhead in 1973, and became successful competitions. She

her old-fashioned, and I do but a weak opening hand, or a member of the National continued in the demanding

just that! I have been opening with any five-card spade suit Housewives Register. She was role of Events Co-ordinator

1♣ with 5-5 in the black suits and a strong hand. Then over a asked to run the bridge even after taking on the

ever since first reading S.J. red-suit response, with the section, discovered duplicate additional responsibility of

Simon’s Design For Bidding former rebid 2♠ and the latter bridge, and was, to quote County Chairman.

forty-five years ago, and I still rebid 3♣. her husband, Tony, ‘totally Many people in clubs also

think it makes for much easier But with a weak hand and hooked’. The county bridge received training from

auctions, so I am a strong sup- not a good spade holding (e.g. scene benefited from her Margaret on EBU Club Dir-

porter of Michelle’s case. only one honour card) open commitment ever since. ectors’ courses.

I hope she persuades people, 1♣ and rebid 1♠. In 1980 she gained her Over the past fifteen years

but have a suspicion that Thanks for another very EBU Bridge Teaching Certi- or so, Margaret gave an

views may prevail. Wallace Curtis, London fied as a Club Director, one effort and enthusiastic sup-

Tony Richards, Woking of the first to do so in the port to bridge in her county.

WHO could resist being old- county. In 1992 she obtained She will be greatly missed

a good argument in favour of change to the convention card? when many did not. She had the warmth and friendliness

there preference. I am with Michelle. been assisting and directing of her personality.

I would suggest the follow- Mike Bennett, by e-mail

Raymond, who died aged 71, was, for manager for Honeywell and moved to ding winning

four decades, one of Britain’s leading Glasgow. After his return to England in a world bronze

bridge players and administrators. In 1975 he lived in Middlesex and initially for the Women

1987 he was a member of the British formed a partnership with Bill Pencharz, in 1980, and

team that won silver at both the Euro- earning four caps for England. But his gold for the

pean and World Championships, and greatest success in British teams came Juniors at the

was a World Bridge Master. from his eight-year partnership with Tony 1989 World

In the Home Internationals, Brock had Forrester, bridge columnist of the Daily Championships in Nottingham. He

twenty-six caps for England as a player Telegraph, which began in 1982. This was a key figure in coaching young

and, later, four as non-playing captain, included the World and European silver players, and in 1994 captained the

including last year. Whilst resident in medals, and two bronze medals at Com- British Junior team that won the Euro-

Glasgow in the early ’70s, he had seven mon Market Championships. peans and went on to win the world title

matches for Scotland in the era when Of numerous national titles, his most the following year in Bali. Brock was an

times. Brock won the Gold Cup, the ionship for the Crockfords Cup in 2004. Raymond Brock married for the first

British knock-out championship, on This was his sixth win in the event. time in 1993. His widow, Sally, is one of

Manchester University and became a EBU. He was twice President of the and the British Mixed Pairs twice. They