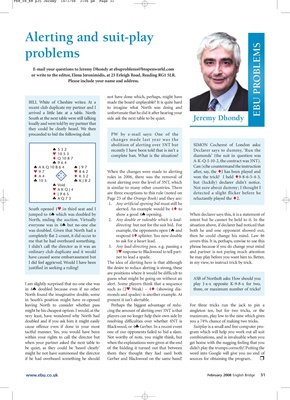 BILL White of Cheshire writes: At a made the board unplayable? It is quite hard

arrived a little late at a table. North unfortunate that he did it after hearing your

loudly and were told by my partner that

they could be clearly heard. We then

proceeded to bid the following deal: PW by e-mail says: One of the

changes made last year was the

abolition of alerting over 3NT but SIMON Cochemé of London asks:

♠ 532 recently I have been told that is isn’t a Declarer says to dummy, ‘Run the

♥ 10 5 3 complete ban. What is the situation? diamonds’ (the suit in question was

♥ 862 When the changes were made to alerting after, say, the ♦J has been played and

♥ AKQJ4 is similar to many other countries. There Not sure about dummy; I thought I

1. Any artificial opening bid must still be

South opened 1♥ in third seat and I alerted. An example would be 4♦ to

jumped to 4♠ which was doubled by show a good 4♠ opening. When declarer says this, it is a statement of

North, ending the auction. Virtually 2. Any double or redouble which is lead- intent but he cannot be held to it. In the

everyone was in 4♠ but no-one else directing but not for the suit bid. For situation above, if declarer had noticed that

was doubled. Given that North had a example, the opponents open 1♠ and both he and one opponent showed out,

completely flat 2-count, it did occur to respond 4♦ splinter. You now double then he could change his mind. Law 46

me that he had overheard something. to ask for a heart lead. covers this. It is, perhaps, unwise to use this

I didn’t call the director as it was an 3. Any lead-directing pass. e.g. passing a phrase because if you do change your mind

have caused some embarrassment but ner to lead a spade. he may play before you want him to. Better,

I did feel aggrieved. Would I have been The idea of alerting here is that although in my view, to instruct trick by trick.

justified in seeking a ruling? the desire to reduce alerting is strong, these

are positions where it would be difficult to

guess what might be going on without an ASB of Northolt asks: How should you

I am slightly surprised that no-one else was alert. Some players think that a sequence play J-x-x opposite K-9-8-x for two,

North found the imaginative double, some monds and spades) is another example. At

in South’s position might have re-opened present it isn’t alertable.

might be his cheapest option. I would, at the cing the amount of alerting over 3NT is that singleton ten, but for two tricks, or the

very least, have wondered why North had players can no longer help their own side by maximum, play low to the nine which gives

doubled and if you ask him it might easily resolving difficulties over whether 4NT is you a 74% chance of making two tricks.

cause offence even if done in your most Blackwood, or 4♣ Gerber. In a recent event Suitplay is a small and free computer pro-

tactful manner. Yes, you would have been one of our opponents failed to bid a slam. gram which will help you work out all suit

within your rights to call the director but Not worthy of note, you might think, but combinations, and is invaluable when you

be quiet, as they could be ‘heard clearly’ of the bidding it turned out that between didn’t play the trumps correctly! Putting the

if he had overheard something he should Gerber and Blackwood on the same hand! sources for obtaining the program.