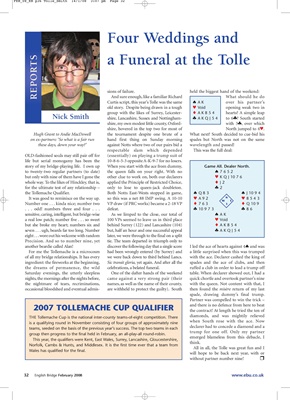 a Funeral at the Tolle

sions of failure. held the biggest hand of the weekend:

And sure enough, like a familiar Richard What should he do

Curtis script, this year’s Tolle was the same ♠AK over his partner’s

old story. Despite being drawn in a tough ♥ Void opening weak two in

group with the likes of Surrey, Leicester- ♦AK854 hearts? A simple leap

shire, my own modest little county, Oxford- with 3♣, over which

shire, hovered in the top two for most of North jumped to 4♥.

Hugh Grant to Andie MacDowell the tournament despite one brute of a What next? South decided to cue-bid his

on ex-partners: ‘So what is a fair run hand first thing on Sunday morning spades but North was not on the same

these days, down your way?’ against Notts where two of our pairs bid a wavelength and passed!

respectable slam which depended This was the full deal:

story of my bridge-playing life. I own up When you start with the ace from dummy, Game All. Dealer North.

to twenty-two regular partners (to date) the queen falls on your right. With no ♠7652

whole way. To the likes of Hinckley, that is, applied the Principle of Restricted Choice, ♦J2

for the ultimate test of any relationship – only to lose to queen-jack doubleton. ♣2

sensitive, caring, intelligent, but bridge-wise As we limped to the close, our total of ♠AK

seven . . . ugh, beards far too long. Number but, half an hour and one successful appeal ♣AKQJ54

eight . . . wore out his welcome with random later, we were through to the final on a split

Precision. And so to number nine, yet tie. The team departed in triumph only to

another beardie called Alan! discover the following day that a single score I led the ace of hearts against 4♠ and was

of all my bridge relationships. It has every we were back down to third behind Lancs. with the ace. Declarer cashed the king of

ingredient: the fireworks at the beginning, Sic transit gloria, yet again. And after all the spades and the ace of clubs, and then

the dreams of permanence, the wild celebrations, a belated funeral. ruffed a club in order to lead a trump off

Saturday evenings, the utterly sleepless One of the dafter hands of the weekend table. When declarer showed out, I had a

nights, the mornings after the nights before, came against a very strong pair (their quick chortle and overtook partner’s nine

the nightmare of tears, recriminations, names, as well as the name of their county, with the queen. Not content with that, I

occasional bloodshed and eventual admis- are withheld to protect the guilty). South then found the misère return of my last

Partner was compelled to win the trick –

and there is no defence from here to beat

2007 TOLLEMACHE CUP QUALIFIER the contract! At length he tried the ten of

THE Tollemache Cup is the national inter-county teams-of-eight competition. There diamonds, and was mightily relieved

is a qualifying round in November consisting of four groups of approximately nine when South rose with the ace. Now

teams, seeded on the basis of the previous year’s success. The top two teams in each declarer had to concede a diamond and a

group then progress to the final held in February, an all-play-all round-robin.

trump for one off. Only my partner

emerged blameless from this débacle, I

Norfolk, Cambs & Hunts, and Middlesex. It is the first time ever that a team from

All in all, the Tolle was great fun and I

Wales has qualified for the final.

will hope to be back next year, with or