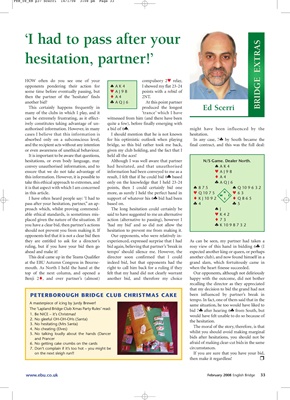 ‘I had to pass after your

HOW often do you see one of your compulsory 2♥ relay,

some time before eventually passing, but ♥ A J98 points with a rebid of

another bid? ♣ A QJ6 At this point partner

This certainly happens frequently in produced the longest Ed Scerri

many of the clubs in which I play, and it ‘trance’ which I have

can be extremely frustrating, as it effect- witnessed from him (and there have been

ively constitutes taking advantage of un- quite a few), before finally emerging with

authorised information. However, in many a bid of 6♣. might have been influenced by the

cases I believe that this information is I should mention that he is not known hesitation.

absorbed only on a subconscious level, for his optimistic outlook when playing In any case, 7♣ by South became the

and the recipient acts without any intention bridge, so this bid rather took me back, final contract, and this was the full deal:

or even awareness of unethical behaviour. given my club holding, and the fact that I

It is important to be aware that questions, held all the aces!

hesitations, or even body language, may Although I was well aware that partner N/S Game. Dealer North.

this information. However, it is possible to result, I felt that if he could bid 6♣ based ♦A4

take this ethical approach to extremes, and only on the knowledge that I held 23-24 ♣AQJ6

proach which, whilst proving commend- The long hesitation could certainly be ♠J

able ethical standards, is sometimes mis- said to have suggested to me an alternative ♥K42

placed given the nature of the situation. If action (alternative to passing), however I ♦73

opponents feel that it is not a clear bid then Our opponents, who were relatively in-

they are entitled to ask for a director’s experienced, expressed surprise that I had As can be seen, my partner had taken a

ruling, but if you have your bid then go bid again, believing that partner’s ‘break in rosy view of this hand in bidding 6♣ (I

ahead and make it! tempo’ should silence me. However, the expected another king or queen, or perhaps

This deal came up in the Teams Qualifier director soon confirmed that I could another club), and now found himself in a

at the EBU Autumn Congress in Bourne- indeed bid, but that opponents had the grand slam, which fortuitously came in

mouth. As North I held the hand at the right to call him back for a ruling if they when the heart finesse succeeded.

top of the next column, and opened a felt that my hand did not clearly warrant Our opponents, although not deliriously

Benji 2♦, and over partner’s (almost) another bid, and therefore my choice happy with the outcome, did not bother

recalling the director as they appreciated

that my decision to bid the grand had not

tempo. In fact, one of them said that in the

A masterpiece of icing by Jurdy Brewer!

same situation, he too would have liked to

1. Be NICE – it’s Christmas! would have felt unable to do so because of

The moral of the story, therefore, is that

5. No talking loudly about the hands (Dancer whilst you should avoid making marginal

and Prancer bids after hesitations, you should not be

6. No getting cake crumbs on the cards afraid of making clear-cut bids in the same

7. Don’t complain if it’s too hot – you might be circumstances.

on the next sleigh run!! If you are sure that you have your bid,

then make it regardless!