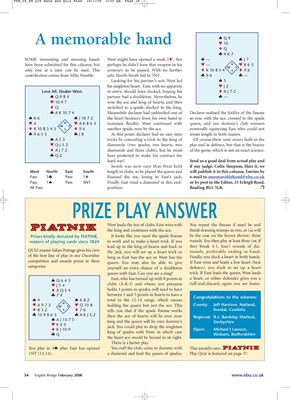 SOME interesting and amusing hands West might have opened a weak 2♦, but ♠ — ♠ J7

have been submitted for this column, but perhaps he didn’t have that weapon in his ♥ —

his singleton heart. East, with no apparent ♥J2

Love All. Dealer West. re-entry, should have ducked, hoping his ♦AJ72

♠Q984 partner had a doubleton. Nevertheless, he ♣—

♦Q switched to a spade, ducked to the king.

♣ 9653 ♣J8 At this point, declarer had an easy nine retain length in both majors.

♥QJ52 diamonds (two spades, two hearts, two play and in defence, but that is the beauty

♦AJ72 diamonds and three clubs), but he must of the game, which is not an exact science.

♣Q2 have preferred to make his contract the

hard way! Send us a good deal from actual play and

South was now sure that West held if our judge, Colin Simpson, likes it, we

West North East South length in clubs, so he played the queen and will publish it in this column. Entries by

Pass 1♠ Pass 3NT Finally East tried a diamond in this end- or by post to the Editor, 23 Erleigh Road,

PRIZE PLAY ANSWER West leads the ten of clubs. East wins with You repeat the finesse if need be and

the king and continues with the ace. finish drawing trumps in two, or (as will

Prizes kindly donated by PIATNIK, It looks like you need the spade finesse be the case on the layout shown) three

makers of playing cards since 1824 to work and to make a heart trick. If you rounds. You then play at least three (or, if

lead up to the king of hearts and back to they break 4-1, four) rounds of dia-

QUIZ master Julian Pottage gives his view the jack, you will set up a heart trick so monds, preferably ending in hand.

of the best line of play in our December long as East has the ace or West has the Finally, you duck a heart in both hands.

competition and awards prizes in three queen. You may also be able to give If East wins and leads a low heart (best

categories. yourself an extra chance of a doubleton defence), you duck to set up a heart

queen with East. Can you see a snag? trick. If East leads the queen, West leads

East, who has turned up with 8 points in a heart, or either defender gives you a

♥ J54 clubs (A-K-J) and whom you presume ruff-and-discard, again you are home.

♦ AQ54 holds 3 points in spades, will need to have

Congratulations to the winners:

jack. You could play to drop the singleton

king of spades with West, in which case

the heart ace would be bound to sit right.

There is a better play.

You play in 4♠ after East has opened You ruff the club, cross to dummy with This month’s new