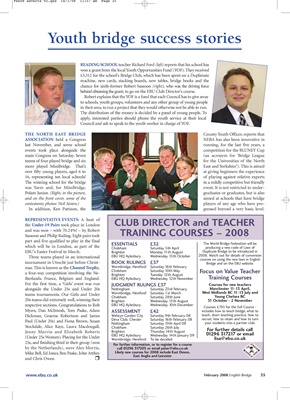 won a grant from the local Youth Opportunities Fund (YOF). They received

£3,312 for the school’s Bridge Club, which has been spent on a Duplimate

chance for sixth-former Robert Sassoon (right), who was the driving force

behind obtaining the grant, to go on the EBU Club Director’s course.

to schools, youth groups, volunteers and any other group of young people

in their area, to run a project that they would otherwise not be able to run.

The distribution of the money is decided by a panel of young people. To

apply, interested parties should phone the youth service at their local

Council and ask to speak to the youth worker in charge of YOF.

ASSOCIATION held a Congress NEBA has also been innovative in

last November, and some school running, for the last five years, a

events took place alongside the competition for the BLUNEY Cup

main Congress on Saturday. Seven (an acronym for ‘Bridge League

more played MiniBridge. That’s East and Yorkshire’). This is aimed

over fifty young players, aged 6 to at giving beginners the experience

was Yarm and, for MiniBridge, event. It is not restricted to under-

Polam Junior. (Right, in the picture, graduates or graduates, but is also

and on the front cover, some of the aimed at schools that have bridge

contestants; photos: Neil Aiston.) players of any age who have pro-

In addition, Ken Pattison, the gressed beyond a very basic level.

REPRESENTATIVE EVENTS: A heat of

part and five qualified to play in the final

which will be in London, as part of the

ESSENTIALS £32 The World Bridge Federation will be

1th Duplicate Bridge to be introduced in

courses on using the new laws in English

tournament in Utrecht just before Christ- BOOK RULINGS £37 Bridge and on the EBU website.

mas. This is known as the Channel Trophy, Wormbridge, Hereford Saturday 16th February

a four-way competition involving the Ne-

For the first time, a ‘Girls’ event was run JUDGMENT RULINGS £37 Courses for new teachers

alongside the Under 25s and Under 20s Nottingham Saturday 23rd February Manchester 11-13 April,

teams tournaments. Our Girls and Under Wormbridge, Hereford Saturday 1st March West Midlands BC 11-13 July and

Deva Club, Chester Saturday 16th February 08 recruit, how to retain and how to turn

(Under 25s Women). Playing for the Under Wormbridge, Hereford To be decided lisa@ebu.co.uk

25s, and finishing third in their group (won For further information, or to register for a course