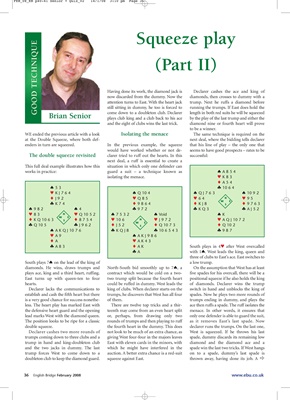 Having done its work, the diamond jack is Declarer cashes the ace and king of

now discarded from the dummy. Now the diamonds, then crosses to dummy with a

attention turns to East. With the heart jack trump. Next he ruffs a diamond before

still sitting in dummy, he too is forced to running the trumps. If East does hold the

come down to a doubleton club. Declarer length in both red suits he will be squeezed

and the eight of clubs wins the last trick. diamond nine or fourth heart will prove

to be a winner.

at the Double Squeeze, where both def- next deal, where the bidding tells declarer

enders in turn are squeezed. In the previous example, the squeeze that his line of play – the only one that

The double squeeze revisited clarer tried to ruff out the hearts. In this successful:

next deal, a ruff is essential to create a

works in practice: guard a suit – a technique known as ♠ A854

three of clubs to East’s ace. East switches to

South plays 7♠ on the lead of the king of a low trump.

diamonds. He wins, draws trumps and North-South bid smoothly up to 7♠, a On the assumption that West has at least

plays ace, king and a third heart, ruffing. contract which would be cold on a two- five spades for his overcall, there will be a

hearts. could be ruffed in dummy. West leads the of diamonds. Declarer wins the trump

Declarer lacks the communications to king of clubs. When declarer starts on the switch in hand and unblocks the king of

establish and cash the fifth heart but there trumps, he discovers that West has all four spades. Now he plays two more rounds of

is a very good chance for success nonethe- of them. trumps ending in dummy, and plays the

less. The heart play has marked East with There are twelve top tricks and a thir- ace then ruffs a spade. The ruff isolates the

the defensive heart guard and the opening teenth may come from an even heart split menace. In other words, it ensures that

lead marks West with the diamond queen. or, perhaps, from drawing only two only one defender is able to guard the suit,

The position looks to be ripe for a classic rounds of trumps and then playing to ruff as it removes East’s last spade. Now

double squeeze. the fourth heart in the dummy. This does declarer runs the trumps. On the last one,

Declarer cashes two more rounds of not look to be much of an extra chance, as West is squeezed. If he throws his last

trumps coming down to three clubs and a giving West four-four in the majors leaves spade, dummy discards its remaining low

trump in hand and king-doubleton club East with eleven cards in the minors, with diamond and the diamond ace and a

and the two jacks in dummy. The last which he might have interfered in the spade win the last two tricks. If West hangs

trump forces West to come down to a auction. A better extra chance is a red-suit on to a spade, dummy’s last spade is

doubleton club to keep the diamond guard. squeeze against East. thrown away, having done its job. A