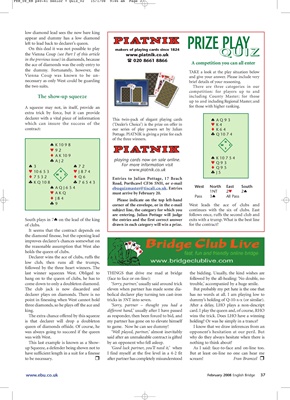 appear and dummy has a low diamond

left to lead back to declarer’s queen.

the Vienna Coup (see Part I of this article www.piatnik.co.uk

the dummy. Fortunately, however, the TAKE a look at the play situation below

Vienna Coup was known to be un- and give your answer. Please include very

necessary as only West could be guarding brief details of your reasoning.

the two suits. There are three categories in our

The show-up squeeze including County Master; for those

up to and including Regional Master; and

A squeeze may not, in itself, provide an for those with higher ranking.

extra trick by force, but it can provide

contract: our series of play posers set by Julian ♦ K64

of the three winners.

♣ 9 corner of the envelope, or in the e-mail West leads the ace of clubs and

subject line, the category for which you continues with the six of clubs. East

are entering. Julian Pottage will judge follows once, ruffs the second club and

South plays in 7♠ on the lead of the king the entries and the first correct answer exits with a trump. What is the best line

of clubs. drawn in each category will win a prize. for the contract?

It seems that the contract depends on

the diamond finesse, but the opening lead

the reasonable assumption that West also

holds the queen of clubs.

Declarer wins the ace of clubs, ruffs the

low club, then runs all the trumps,

followed by the three heart winners. The

last winner squeezes West. Obliged to THINGS that drive me mad at bridge the bidding. Usually, the kind wishes are

hang on to the queen of clubs, he has to (face to face or on-line): followed by the all-healing: ‘No double, no

come down to only a doubleton diamond. ‘Sorry, partner,’ usually said around trick trouble,’ accompanied by a huge smile.

declarer plays on diamonds. There is no bolical declarer play turning ten cast-iron has no words at all. I am playing low to

point in finessing when West cannot hold tricks in 3NT into seven. dummy’s holding of Q-10-x-x (or similar).

three diamonds, so he plays off the ace and ‘Sorry, partner – thought you had a After a delay, LHO plays a non-descript

king. different hand,’ usually after I have passed card. I play the queen and, of course, RHO

The extra chance offered by this squeeze as responder, then been forced to bid, and wins the trick. Does LHO have a winning

is that declarer will drop a doubleton my partner has gone on to elevate himself holding? Or was he simply in a trance?

queen of diamonds offside. Of course, he to game. Now he can see dummy! I know that we draw inferences from an

was always going to succeed if the queen ‘Well played, partner,’ almost inevitably opponent’s hesitation at our peril. But

was with West. said after an unmakeable contract is gifted why do they always hesitate when there is

This last example is known as a Show- by an opponent who fell asleep. nothing to think about?

up Squeeze, a defender being shown not to ‘Good luck partner, you’ll need it,’ when As I said: face-to-face and on-line too.

to be necessary. after partner has completely misunderstood scream! Fran Bramzel