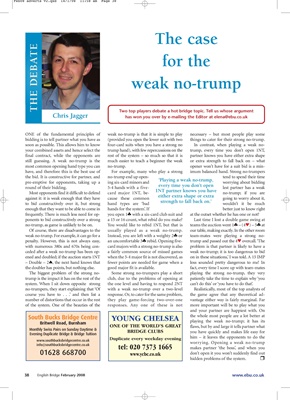 Chris Jagger has won you over by e-mailing the Editor at elena@ebu.co.uk

bidding is to tell partner what you have as (provided you open the lower suit with two things to cater for their strong no-trump.

soon as possible. This allows him to know four-card suits when you have a strong no In contrast, when playing a weak no-

your combined assets and hence select the trump hand), with few repercussions on the trump, every time you don’t open 1NT,

final contract, while the opponents are rest of the system – so much so that it is partner knows you have either extra shape

still guessing. A weak no-trump is the much easier to teach a beginner the weak or extra strength to fall back on – what

most common opening hand type you can no-trump. opener won’t have for a suit bid is a min-

have, and therefore this is the best use of For example, many who play a strong imum balanced hand. Strong no-trumpers

the bid. It is constructive for partner, and no-trump end up open- tend to spend their time

pre-emptive for opponents, taking up a ing six-card minors and ‘Playing a weak no-trump, worrying about bidding

round of their bidding. 5-4 hands with a five- every time you don’t open lest partner has a weak

Most opponents find it difficult to defend card major 1NT, be- 1NT partner knows you have no-trump; if you are

against it: it is weak enough that they have cause these common either extra shape or extra going to worry about it,

to bid constructively over it, but strong hand types are ‘bad strength to fall back on.’ wouldn’t it be much

enough that they want to be able to come in hands for the system’. If better just to know right

frequently. There is much less need for op- you open 1♣ with a six-card club suit and at the outset whether he has one or not?

ponents to bid constructively over a strong a 15 or 16 count, what rebid do you make? Last time I lost a double game swing at

Of course, there are disadvantages to the usually played as a weak no-trump. our table, making exactly. In the other room

weak no-trump. For example, it can go for a Instead, you are left with a weighty 2♣ or team-mates were playing a strong no-

penalty. However, this is not always easy, an uncomfortable 3♣ rebid. Opening five- trump and passed out the 4♥ overcall. ‘The

ceded after a weak no-trump has been op- a fairly common source of missed games weak no-trump; it is too dangerous to bid

ened and doubled; if the auction starts 1NT when the 5-4 major fit is not discovered, as on in these situations,’ I was told. A 15 IMP

– Double – 2♠, the next hand knows that fewer points are needed for game when a loss sounded pretty dangerous to me! In

the doubler has points, but nothing else. good major fit is available. fact, every time I score up with team-mates

trump is the impact it has on the rest of the club, due to the problems of opening at patiently take the time to explain why ‘you

system. When I sit down opposite strong the one level and having to respond 2NT can’t do this’ or ‘you have to do that’.

no-trumpers, they start explaining that ‘Of with a weak no-trump over a two-level Realistically, most of the top analysts of

course you have to . . .’ and then list a response. Or, to cater for the same problem, the game agree that any theoretical ad-

number of distortions that occur in the rest they play game-forcing two-over-one vantage either way is fairly marginal. Far

of the system. One of the beauties of the responses. Any one of these is not more important will be to play what you

and your partner are happiest with. On

YOUNG CHELSEA playing the weak no-trump; it has its

ONE OF THE WORLD’S GREAT flaws, but by and large it tells partner what

you have quickly and makes life easy for

hidden problems of the system.