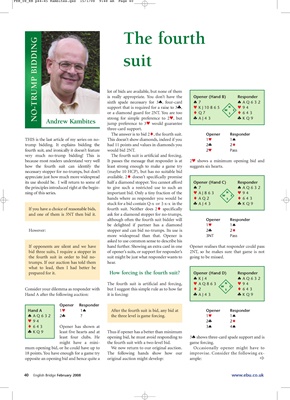 lot of bids are available, but none of them

is really appropriate. You don’t have the Opener (Hand B) Responder

The answer is to bid 2♦, the fourth suit. Opener Responder

THIS is the last article of my series on no- This doesn’t show diamonds, indeed if you 1♥ 1♠

trump bidding. It explains bidding the had 11 points and values in diamonds you 2♣ 2♦

very much no-trump bidding! This is The fourth suit is artificial and forcing.

how the fourth suit can identify the least strong enough to make a game try suggests six hearts.

necessary stopper for no-trumps, but don’t (maybe 10 HCP), but has no suitable bid

its use should be. I will return to some of half a diamond stopper. You cannot afford Opener (Hand C) Responder

ning of this series. important bid. Only a tiny fraction of the ♥ AJ863 W

If you have a choice of reasonable bids, fourth suit. Neither does 2♦ specifically

and one of them is 3NT then bid it. ask for a diamond stopper for no-trumps,

although often the fourth suit bidder will Opener Responder

be delighted if partner has a diamond 1♥ 1♠

more widespread than that. Opener is 3NT Pass

asked to use common sense to describe his

If opponents are silent and we have hand further. Showing an extra card in one Opener realises that responder could pass

bid three suits, I require a stopper in of opener’s suits, or support for responder’s 2NT, so he makes sure that game is not

the fourth suit in order to bid no- suit might be just what responder wants to going to be missed.

trumps. If our auction has told them hear.

what to lead, then I had better be

prepared for it. How forcing is the fourth suit? Opener (Hand D) Responder

The fourth suit is artificial and forcing, ♥ AQ863

Hand A 1♥ 1♠ After the fourth suit is bid, any bid at Opener Responder

least four clubs. He opening bid, he must avoid responding to 3♠ shows three-card spade support and is

might have a mini- the fourth suit with a two-level bid. game forcing.

mum opening bid, or he could have up to We now return to our original auction. Occasionally opener might have to

18 points. You have enough for a game try The following hands show how our improvise. Consider the following ex-

opposite an opening bid and hence quite a original auction might develop: ample: