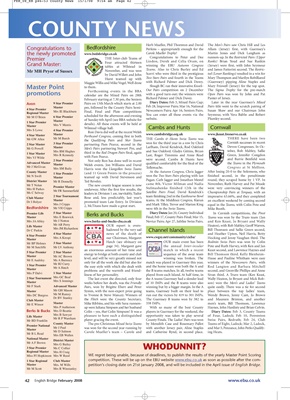 Congratulations to Bedfordshire Perkins – appropriately enough for the Allam (Jersey) first, with Guernsey’s

Congratulations to Peter and Dee runners-up. In the Restricted Pairs (Upper

Premier THE Inter-club Teams of

Teams. Also to Chris Burley and Ed and James Fattorini second. The Restric-

Mr MH Pryor of Sussex November, and was won

by David Willett and John

Slough BC ran their innovative Knock- Mary Friswell (Jersey) for the top spot.

Master Point to them.

promotions calendar are the Mixed Pairs on 28th with a good turn-out; the winners were Open Pairs was won by John and Pat

scheduled for the afternoon and evening You can enter all these events via the Seymour, with Vera Babbe and Robert

Mrs V Morris details). All these events will be held at

Ron Davis did well at the recent Welsh

Porthcawl Congress, coming first in both

the Qualifying Pairs and Sker Teams

2 Star Premier Not only Ron has done well in recent were second. Cambs & Hunts have and Barrie Benfield won

County Master (and 11 Green Points in the process) At the Autumn Congress, Chris Jagger After losing 20-0 to the Solomons, who

Mr N Swift Master teamed up with David Stevenson and won the Two Stars Pairs playing with Ian finished second, in the penultimate

Mrs H Parkes underway. After the first few results, the

Master teams. At the Middlesex Congress, Kieran an excellent weekend by coming second

Mrs J Cripps 2, McTitans have made a great start. and Mark Tilley, Trevor and Marion King equal in the Teams, with Colin Pote and

4 Star Master news of the death of and Heather Upton, Neil Harris, Betty

Mrs A Krespi our Chairman, Margaret www.cwgsy.net/community/cicba/ Hocking and Jenny Vaughan third. The

an enormous amount of her time and match in which a recent Keast second, and Lawrence Haynes and

energy to bridge at both county and club sequence of the away team Bill Thomson third. Kelly Blenheim-

level, and will be very greatly missed not winning was broken. The Hasse and Pauline Whitham were easy

Mr RJ Curry only for all the work she did but also for match was played in Guernsey this year, winners of the Newcomers Pairs, with

problems and the warmth and friend- the B teams matches. In all, twelve teams second, and Grenville Phillips and Anne

liness of her personality. played from each Island. At half time, in Sivan third. A Truro team (Ken Keast,

weeks before her death, was the Friendly of 10 IMPs and the B teams were also son) won the Men’s and Ladies’ Teams

Mr F Stark Advanced Master Pairs, won by Brigitte Ebert and Peter winning but by a bigger margin. In the A quite easily. There was a tie for second

Master Mr GH Mason Symm, with the non-expert prize going teams, Guernsey built on their lead to place between the top ladies’ team,

Dr BV Stanley the Flitch were the County Secretary, The Guernsey B teams won by 382 to and Maureen Brinton, and another

Mrs P Autherson up were Juliana Simpson and her husband With so many of the best County Haynes, John Hardisty and Brian Colvin.

Berks & Bucks Mrs D Beattie Colin – yes, that Colin Simpson! It was a players in Guernsey for the weekend, the Diary Dates: Feb 3, County Teams

Mrs B Sawyer pleasure to have such a distinguished opportunity was taken to play several of Four, Ladock; Feb 10, Penventon

Mr J Paul was won for the second year running by with another Jersey pair, Aline Staples and Mar 5, Penzance, John Perks Qualify-

Miss PJ Hopkinson Mrs W Reed WE regret being unable, because of deadlines, to publish the results of the yearly Master Point Scoring

1 Star Regional Club Master competition. These will be up on the EBU website www.ebu.co.uk as soon as possible after the com-

Master Mrs. M Wills petition’s closing date on 21st January 2008, and will be included in the April issue of English Bridge.