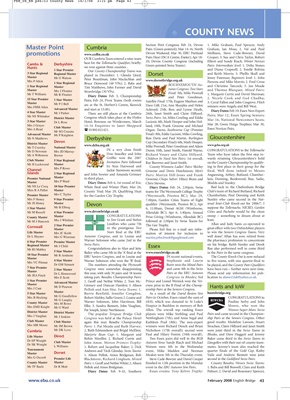 OUR Cumbria Team entered a nine-team

Hunts we won against three counties .

are at the St. Herbert’s Centre, Keswick Dave Gill; 21st, Ann Sharples and Helen winners were Angela and Bill West.

Mr J Parker There are still places at the Cumbria 26th, Janet Smith and Claire Hillyard.

Mr A Wilkinson Brown Don Smedley and John Richard Vessey and Claire Hillyard. Team who have taken the first step to-

by Stan Haywood and County Winners: Ladies’ Pairs: Shirley ing in first place in their group for the

County Master Master CONGRATULATIONS Prize Giving (Wimborne, Allendale BC) sweep – something to dream about at

Life Master Mrs JC Keith Stars final at the EBU mation of interest for inclusion to to win the Seniors Congress Teams. Very

5 Star Master Bailey who came 5th in the ‘A’ final at the www.essexbridge.co.uk in the Pairs in the same congress.

EBU Seniors Congress, and to Louise and IN recent national events, The County Knock-Out is now reduced

4 Star Master Warner Solomon who won the ‘B’ final. Stephanie and Laurie to five teams, with one quarter-final to

Dr GM Simnett The numbers attending the Plymouth Burtt won the Mixed Pairs be played, and the County Pairs Qualifiers

7 Star Premier Congress were somewhat disappointing and came 4th in the Swiss have been run – further news next time.

Dr L Homewood this year, with only 30 pairs and 18 teams Pairs at the EBU Autumn Please send any information for pub-

Master Grenary and Duncan Hamlyn; 3. Alison erans prize in the B Final of the Champ-

Mrs J Vaughan Mr J Jenkins Congress was held at the Palace Hotel Nettlingham (7th), and Anne Segal and ship Pairs at the Seniors Congress. Other

Robin Mardlin; 2. Richard Currie and Two Essex pairs did well in the BGB Baker came third in the Swiss Teams in