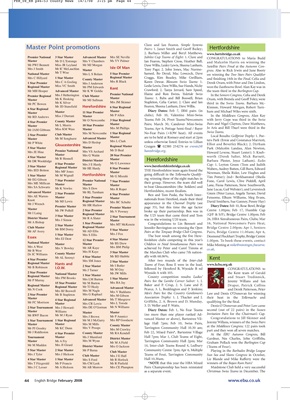 Master are to be held at Romsey and start at 2pm Local Results: Golfprint Trophy: 1. Por-

THE Herefordshire team again found the

7 Star Premier their group. However, the team did well

to beat Gloucestershire (the holders) and

Master nationals from Hereford, made their third

Mrs BC Schultz appearance in the Channel Trophy (see

Mr JW Polhill Ms V Powney broke up their partnership. Ben was in

Mrs SM Jones After two rounds of the Inter-club

Hants and Mr I Butler Teams of Four, Ross E were in the lead, www.kcba.org.uk

I.O.W. Mr M Guy followed by Hereford B, Wyeside B nd CONGRATULATIONS to

Master Association Trophy: 1. J. Thacker and J. their heat in the Tollemache and

Griffiths, 2. A. Brown and D. Munday, qualifying for the final.

Master Williams Diary Dates: Feb 1, No Fear Teams second (out of 22 pairs) in the Sussex

vanced Master or above), Bartestree Vil- Congratulations to Jill Skinner and

part and they won all seven matches.

At the EBU Autumn Congress, Bill

as a separate event. Christmas Swiss Teams in December. The